The Black Douglas by S.R. Crockett, edited by Cally Phillips 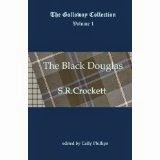 Literature, it seems, is as subject to the quirks of fashion as just about every other area of human activity. S.R. Crockett was a tremendously popular novelist back in the late nineteenth and early twentieth centuries; now, barely a hundred years later, he’s much less widely known. However, that might perhaps be about to change, due to Authors Electric’s very own Cally Phillips, who has been working flat-out to republish Crockett’s works, and hopefully introduce them to a whole new generation. (Go to the Ayton Publishing website to see the entire collection.)

The Black Douglas revolves around a cast of actual historical figures, including William Sixth Earl of Douglas (“The Black Douglas” of the title), and Gilles de Retz, the loopy French nobleman who fought alongside Joan of Arc before (allegedly) embarking on a life of occult rituals and murder most vile. The story unfolds against a backdrop of mediaeval Scotland (in particular, Crockett’s native Galloway) and France, and is frequently told through the eyes of the Earl’s sidekick and knight, Sholto MacKim.

And what a story it is, involving murder, blood-drinking, witchcraft and werewolves, no less. The Black Douglas was published in 1899, two years after Dracula first appeared, and I’d be surprised if it hadn’t been influenced by that novel to some extent. Many of the elements of Dracula are also present here: a sinister, intriguing nobleman who lives in a castle with such a blood-curdling reputation that very few people dare go there; the curious command that said nobleman has over animals, and in particular wolves; and the significance of human blood, particularly as a means of prolonging life. Indeed, anyone who has read Dracula may experience a strange sense of déjà vu when reading a particular passage in The Black Douglas, in which a woman whose child has been abducted hammers, screaming, at the castle door, pleading for his return: “Give me my boy, murderer! Restore me my son!” All that is missing is Stoker’s curious psychosexual take on his material – that, and the vampirism.

For de Retz is not actually a vampire, though his physical appearance brings Stoker’s Count to mind: “The upper lip was retracted, and a set of long white teeth gleamed like those of a wild beast.” Indeed, it may be that he’s simply a deluded madman, though Crockett himself suggests that there’s something genuinely supernatural underlying the story. De Retz is a curious, complex figure: unashamedly villainous, yet given to moments of charm, and even of tenderness. At times he seems to be driven by a desire for knowledge: “I have in secret pushed my researches beyond the very confines of knowledge . . . Evil and good alike shall be mine.” Despite worshipping a demon, and carrying out blood sacrifices in its honour, he is also strangely devout, to the extent of allowing a community of monks to live in his castle and spending hours at his devotions. Crockett describes him as a “good Catholic and ardent religionary.” (This, interestingly, is a feature of much Gothic fiction: a deep suspicion and dislike of Catholicism. More on this in my contribution posts for the Edinburgh Ebook Festival this summer. . .)

The Black Douglas also tells two love stories: the happy one between Sholto and the mischievous but ultimately sweet-natured Maud, and the altogether less happy one between William and Sybilla, the niece of Gilles de Retz, and an integral part of de Retz’s plan to ensnare William. There are traces of La Belle Dame Sans Merci in Crockett’s description of Sybilla. However, there’s also a robust streak of humour in the novel. During a tournament in which Sholto has performed well, a spectator (an armourer by trade) cries: “Well done, Sholto MacKim – well done, lad! . . . Ye shall hae a silken doublet for that! . . . At little mair than cost price!”

I suppose there is a sense in which it is unsurprising that The Black Douglas is less well-known these days. It’s not due to any lack of ability on the part of the author: Crockett was clearly a talented writer. It’s just that fare such as The Black Douglas is perhaps more morally earnest and melodramatic than is currently fashionable. The Black Douglas portrays a world of fair maidens, foul fiends, and unblemished heroes; but you shouldn’t let that put you off reading it. It struck me as being a little like the literary equivalent of a Pre-Raphaelite painting: a little sentimental, perhaps, but ultimately a colourful, adroit, and highly entertaining creation.

Go to Ayton Publishing or Amazon to buy a copy.
Posted by Mari Biella at 00:30