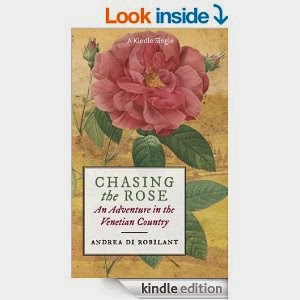 Chasing the Rose: An Adventure in Venetian Country

I love roses, particular the old varieties with names that suggest a long history - who was Madame Albert Carriere?  Does Paul’s Himalayan Musk really come from northern India?  Did Cardinal Richelieu own the rose that is named for him?  And I love the Chinese species roses like Rosa Moyesii imported by travelers hundreds of years ago – and the Persian roses mentioned in the Rubiyat of Omar Khayyam.

‘Look to the blowing Rose about us--"Lo,
Laughing," she says, "into the world I blow,
At once the silken tassel of my Purse
Tear, and its Treasure on the Garden throw." ‘

So I was immediately intrigued by this Kindle single.

Andrea di Robilant had an ancestor, Alvise Mocenigo, who lived at the end of the 18th century and who had a wife called Lucia who became a friend of Empress Josephine after Napoleon had divorced her.  Lucia caught Josephine’s obsession with roses - the rarer the better - and carried many of them back from Paris to the family estate at Alvisipoli in the hills between Trieste and Slovenia in what used to be the Venetian Republic.

The family estate has long since dissolved into ruin, but on a nostalgic visit to the village, Andrea is taken into the gardens - now returned to wilderness - and shown a shrub rose covered in silvery pink flowers.  It smells of peaches and raspberries.


For Andrea, there's a moment of recognition.  ‘Although I did not know much about roses, everything about it, the delicate color, the sweet fragrance, the way it carried itself - suggested this was an old rose of some importance that had been growing wild in these woods for a very long time’.

Locally it’s known as Rosa Moceniga, but no one knows it’s true name.  Andrea plants a cutting in his garden and thinks nothing more of it until one day, researching family history in the Venetian archives, he finds the diaries of Lucia Mocenigo, written while she was in Paris and in the grip of her passion for roses - what was called ‘rosemanie’, an affliction that gave rise to a worldwide rose smuggling operation and a lot of rose snobbery - rivalling ‘tulip fever’ in Holland.

It’s the beginning of a long journey for Andrea, as he becomes obsessed with finding a name for the rose that is the only remnant of Lucia’s love affair with the species.  It takes him to France, Slovenia and Umbria, where he meets some of the characters who collect roses.  This includes Eleanor and Valentino (a retired Italian bus driver and his green-fingered wife) who - although both old and without money - maintain a rose garden that has become famous for its beauty and the number of forgotten species that bloom there.  Eleanor even has an ‘orphan’ section’ for roses whose names have been lost, and it’s there that Andrea finds another Rosa Moceniga.

Altogether only two or three plants on a Parisian list of roses imported from China as the ancestors of modern roses, can still be identified by their original names. We know only a handful of species.  Why are names so important?  After all, ‘A rose by any other name would smell as sweet’, as Shakespeare put it - so he already knew about the business of naming roses.  All the plant’s history is in its name - where it came from, the family it belongs to, the person who first cultivated it in Europe.  Without a name it has no identity and no story.  And that is the situation with the temporarily christened Rosa Moceniga.   I was happy to find that, at the end of Andrea’s journey, he is successful in naming his rose.

I found this book absolutely fascinating and heartily recommend it to readers who are interested in travel, gardening, roses and particularly stories!

Kathleen Jones is a biographer, novelist and poet as well as a keen gardener!  You can find her website at www.kathleenjones.co.uk  and she blogs regularly at 'A Writer's Life'.