This collection of ghost stories for adults is much scarier than it might seem if you only dip into its first few pages.

The title seems quite cosy: it conjures up an image of Dickensian characters sitting round a fire, telling stories.
And, indeed, this is the frame of the book, albeit in modern dress.  A ‘businessman with an 'interest in the paranormal’ hires Moonshiny Hall for a dinner party on Hallowe’en, choosing the house because of its ‘unquiet’ reputation...
Read more...http://authorselectricreviews.blogspot.co.uk/2013/09/review-of-tales-from-moonshiny-hall-by.html 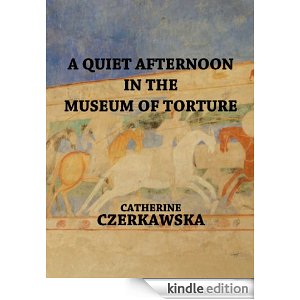 With so many writers joining us, natural curiosity leads to me downloading at least a sample of their books, and often the books are so cheap - cheaper than a magazine – that I think, why mess about?  I’ll just buy it.
And then I read the books thinking, this is so good, why haven’t I read these author before?  Why have they been abandoned by publishers and pushed into self-publishing?
This is exactly what I thought when I downloaded these three short stories by Catherine Czerkawska.

Touch Me With Your Cold, Hard Fingers

It takes skill to create a sense of unease, to permeate the everyday with the surreal, but that’s what Elizabeth Stott has done with this story, published as a chapbook this month by Nightjar Press.

Nightjar has been issuing chapbooks for a while now, curated by Nicholas Royle, the editor of the Best British Book of Short Stories 2013, pub by Salt.  A novelist himself, and a lecturer at Manchester Uni’s Creative Writing department, he has the knack of recognising a good story and a good story-teller.

This one concerns a woman who thinks she has found her soul-mate - a very private, rather secretive man who has finally given her the key to his flat - the first woman to be given that honour.  But, visiting his flat for their usual Saturday night meal together, she finds someone, or something, else in her place.

Elizabeth Stott is a skilled author of short fiction.  She is a scientiest as well as an author and she admits to having a dark sense of humour.   Elizabeth captures exactly the quiet horror of what begins to unfold.  The prose is almost clinical - definitely a case where less is more.


Review of 'Kallee and Other Stories' by F G Turnbull

Does anybody else have this book? Has anyone ever heard of 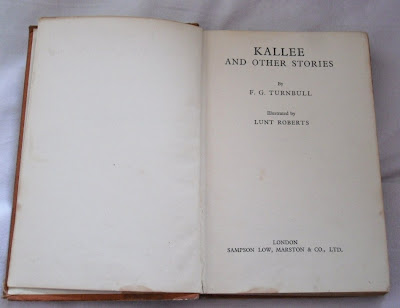 it? 'Kallee and Other Stories' by F. G. Turnbull, and illustrated rather beautifully by Lunt Roberts. (An unfortunate name, but beautiful drawings.)
I ask because I've just found this old friend during the great turning out of my parents' house before selling it. I seized it with a cry of rage at having found it in a box intended to be given away to charity, and carried it away to the safety of my own overcrowded bookcases.
'Kallee' was a great favourite of my Dad's, became a favourite of mine almost in infancy, and yet I've never seen it mentioned anywhere, or heard of the writer in any other context.
I searched on Google, and found out nothing.
The publisher is given as 'London, Sampson Low, Marston & Co, Ltd.' I've just a Google search on this firm, and came on this rather interesting site.
The book itself can be found on sale online, for £14 or $21, used, but not a word about the author, or any reviews.
My copy doesn't give much away. The copyright page is blank, except for this: 'This book is produced in complete conformity with the Authorised Economy Standards. Made and printed in Great Britain by Purnell and Sons, Ltd., Paulton (Somerset) and London.'
My Dad loved it because all the stories are about animals and birds, and he loved them. He began reading me the stories when I was quite small - certainly not much older than seven. He used to read me a story and then put the book away in the bookcase. I would sneak it out, feeling I was doing something very daring in filching one of my Dad's books, and read it for myself.
This is how the title story, KALLEE, begins:


I will never shoot a partridge again; that is a vow I have sworn. I still hope to use my gun through many years to come; but when the coveys rise before me in root or stubble field hereafter, I will keep my weapon at 'trail' and let them go. My spaniel, Roy, will gaze at me, with wonder in his dear old eyes, but he will soon understand that the brown birds are not our game - now that we have known Kallee, that great cock partridge.

They're not really children's stories, as you can see; and yet, over several years, I read them all, returning to the book again and again. Looking through them now, I wonder how I coped with the Scots dialect of the keepers, and with phrases such as, 'As the stoat continued to haunt the field day after day...' Did I think the story meant the ghost of a stoat?
I know I used to guess at the meaning of a lot of words, and also that, if completely defeated, I used to trail off to the nearest of my parents and ask them, 'What does this mean?' Once they'd explained, I'd take the book away again and continue reading.
My Dad often read me the story 'Grumphie' which is about three boys entering their pet pig into a competition. Grumphie has a straight tail, and therefore no chance of winning - but as they're trying to spruce him up, he eats the cake of perfumed soap they're washing him with - and his tail curls! So now they know how to win. 'Wullie; bolt oot an' get a cake o' scented soap.' All the stories are set in Scotland: I wonder if that has anything to do with my tendency to head north whenever possible?
Dad was probably trying to find the lighter, funnier stories, as being more suitable to my age - but when I started reading them for myself, the harsher stories quickly became my favourites. I particularly loved 'Crossed Trails'. This tells of a fox and a stag. The fox, as a cub, is charged and trampled by the stag, and his hind-leg shattered. The story tells how the lame fox grows up and struggles to survive in a hard Highland winter. During a blizzard, the fox and stag find themselves on the same trail, struggling through heavy snow and strong winds. The fox cringes away whenever he glimpses the stag - what he doesn't realise is that the stag is terrified of the fox on his trail. The stag  races away in panic, falls into a 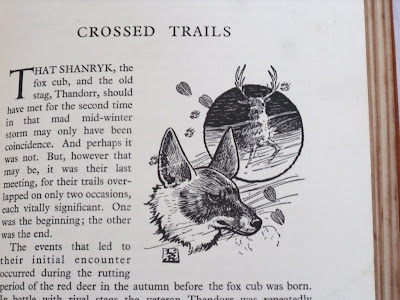 crevasse and is killed. Shortly afterwards, the snow-blinded fox falls into the same hole - and finds himself lying on top of all the food he'll need to survive the winter.
Another great favourite was 'The Rebel of Glenlee.' This tells of, as Monty Python might have put it, 'that most dangerous of all things, an intelligent, rebellious sheep.' She's a trial to her owners, is Birkie, the black-faced ewe. She was a spoilt, pet lamb, but felt herself thrown out of paradise when she was demoted to a mere sheep, and from that day hated all men and collies. She charges the dogs, refuses to return quietly to the home meadows, and leads the other sheep astray.
But she redeems herself one terrible winter, when the flock is lost in the deep snow. Birkie is harried by a fox, but deals with it as she does with collies. Then, as she struggles in deep snow, ravens blind her. In such dire trouble, Birkie starts to hanker for the safety of home, and makes tracks for it, regardless of any obstacles in her way. She happens on the rest of the flock, and they follow her. She guides them all home - and becomes the farmer's pet once again. 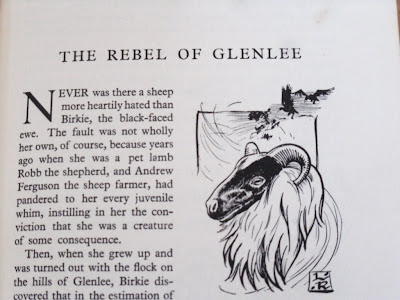