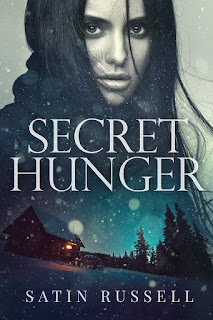 I discovered this book pretty much by accident, when I happened to notice the beautiful cover. Something about that cover just pulled me in and held me tight, and so – though it’s not normally the kind of book I read – I decided to give it a try. I’m glad I did, and it provided me with a little reminder about how reading outside your comfort zone can sometimes really pay off. Secret Hunger is a very good romantic thriller indeed.

The narrative follows Mason, a police officer whose life and career have been plunged into turmoil by an incident in which a violent serial stalker, Robert Mendez, killed his partner and shot and injured Mason himself. A convalescing and traumatised Mason goes to stay with his sister in Maine, and while there he meets Olivia, a local café owner and the eldest of three close sisters who have come to depend on one another since their parents’ death.

So far this is a fairly standard romance plot – man suffering the after-effects of a personal tragedy meets a warm-hearted woman who offers not just love but healing – but this is no cosy romance. Just as Mason has headed north, so too has Mendez – and it isn’t long before Olivia is the new target of his unwelcome attentions. Mason and Mendez’s lives seem to be intertwined: before they were opponents, Mason representative of law and order, and Mendez of violence and lawlessness; now they are rivals for Olivia. But whereas Mason’s courtship is respectful, and his feelings reciprocated, Mendez is obsessive, delusional – and ever ready to spiral into violence and degradation.

I especially liked the insights into Mendez’s thinking: he’s a fantasist and unbelievably violent, but from his point of view there’s a reason for, and a method behind, everything he does. In his own mind, the women he targets actually want to be targeted. In his own mind, he’s offering them redemption. It’s creepy, it’s obviously wrong – and yet it’s undeniably compelling.

There are one or two little gripes. On a couple of occasions, the way the paragraphs were constructed made it difficult to work out who was saying what. Some of the scenes went on a little too long, and involved a little too much exposition and detail. To be fair, that may reflect my personal preferences rather than any objective flaw; in any case, they shouldn’t put anyone off reading Secret Hunger. If you’re anything like me, the cover might be the thing that baits you; but rest assured, the story will reel you in.

Secret Hunger can be downloaded at Amazon.com and Amazon.co.uk.
Posted by Mari Biella at 00:30