Out of the Mouths of Babes by Dennis Hamley - reviewed by John A. A. Logan 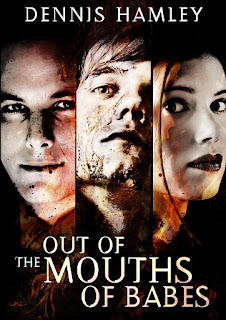 The lives of this novel’s three protagonists, Gary, Julian, and Grizelda, are interwoven beautifully from the outset, with the shifts from one character’s life and world to the next creating a sense of great momentum in the narrative.
I would characterise the voice of this book as one of warm, and sometimes grave,  sensitivity, which suits the psychological depths the story must plumb, particularly in the cases of Gary and Julian. One skill which the author brings to the storytelling here is an almost unique, it seems to me, ability to shift backwards and forwards through time, but without ever losing or confusing the reader. This makes for an endlessly interesting, kaleidoscopic helter-skelter ride through the inner sanctums of the characters’ subconscious impulses, setbacks, growth, development – and finally sets the scene for a penetrative meditation on the theme of guilt itself. How responsible is an individual for the lives and deaths of those they come in contact with? Where is the “line” which defines the beginning and end of such fine levels of responsibility?

This is also the story of the working class/underclass, versus the middle/upper middle class, versus the upper/ruling class of the sort of class-ridden British society which, of course, once moved George Bernard Shaw to comment: “It is impossible for an Englishman to open his mouth without making some other Englishman hate or despise him.”
In Hamley’s novel, though, it is the souls of these Englishmen, and an Englishwoman, which are opened before us, bared to us and also to each other. Though perhaps Grizelda’s soul is not quite so laid bare: rather she is the witness and commentator, even the mediator, attempting to bring justice, perhaps healing, to her lover and to her lover’s childhood victim, Gary.
Gary has been through the fires and the furnace, much of him that would have flourished in more providential soil has been seared and singed away by brutal experience, and injustice. He has emerged on the other side, though, reforged himself into a new form, and it is the destiny of this new form, or new self, that this novel will gradually unfold.
Julian, on the other hand, has been brought up and trained since birth to rule “this sceptered isle”, it is assumed to be his right, his destiny. If the talents of another, or the fruits of those talents, must be appropriated through deceit in order for Julian’s path to be better cleared towards greatness, then that is work worth doing (and Julian will find willing accomplices in that work). And, of course, the results of all that work cannot be “wrong”, they must instead be viewed as expedient method, for the furthering of that Great Destiny which Providence surely must have intended always. Though, if Julian himself is only a child, brainwashed and trained, when the deceits begin, how deep does his personal responsibility really lie? And there begins Mr Hamley’s meditation and penetration on those deep themes of true responsibility and guilt.
Grizelda’s own experience allows her to straddle both worlds, Gary’s and Julian’s, and see the potential in both men, though she is perhaps not conscious yet that her own brilliance has also been co-opted and assimilated into the fulfilment of that destiny for Julian, which Gary’s early incandescence was also absorbed into, as though by the greediest and hungriest of Black Holes.

The supernova potential of this world’s Garys and Grizeldas, only to be thwarted then, devoured, leaving nothing but stellar clue remnants in the black corners of space? Or can such tragedy sometimes result in even stranger fruit?
Julian Claverhouse has his cosmic destiny after all, by right of birth and upbringing, to rule the land - no Oik from a Council estate is he – but equally, when so much of the material absorbed into a Black Hole has come from the best, blazing potential of others, how much of that Black Hole can still be said to consist of the “right Claverhouse stuff” by Journey’s End? Perhaps even one toenail-clipping of Oik in the powerful final mixture could be enough to spoil the alchemy, or perhaps otherwise, enough to save and justify its existence at all?
Julian Claverhouse may very well end up in the exact spot everyone has always been aiming at for him, but by the time he gets there will he still really be Julian Claverhouse? Or, like Cronenbergian fly DNA in his soul, will he carry little pieces of Gary and Grizelda with him always, wherever he may go?
Perhaps Hamley’s message is that all those pulsing stars up there, visible  in the black sky, are really the result of the crashing together of countless disparate fragments, the mangling together of many destinies, to make that strange cosmic fruit cocktail which often may be more the consequence of accident and dream, than breeding.
Gary’s social background, after all – Assessment Centre, Special School, homelessness – is not often the stuff of literature (which, unfortunately, goes a long way to prove Hamley’s point here), but the Gary of this novel is destined to be, at least, the thorn in the British Lion’s paw; and what may come of that is the engine for this story, fuelling its journey into the unknown and unknowable, as, by Black Starlight flooding through the portal window on our right, we make the next mind-bending turn, before shooting onwards, towards areas of social, spiritual and psychological Deep Space we cannot yet see perhaps, but we sense are out there nonetheless.

Email ThisBlogThis!Share to TwitterShare to FacebookShare to Pinterest
Labels: Dennis Hamley, George Bernard Shaw, Out of the Mouths of Babes