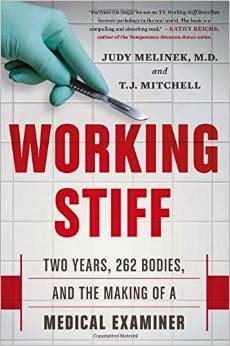 Working Stiff is a brilliant book but be warned, you are spared nothing of the squishy side of death. Anyone newly bereaved for example, or squeamish, or prone to nightmares, might want to treat this with caution. She gives very detailed descriptions of dead bodies and also what they experienced at the end of their lives, often harrowing suffering. The author as a fledgling forensic pathologist became a medical examiner in New York City, and had something of a baptism of fire (and examined some bodies which literally had one). This book is a memoir of her time in the job. An incessant procession of dead people passes before our eyes, with all the variety and drama that NYC can provide.

The number of ways a person can perish there is quite alarming. She takes us on a journey not only into her morgue but into the nerves, bones and cells of the dead, mapping out not only how they died but every detail of what they felt and how long they would have remained conscious to feel it. If you'd rather not know that kind of thing, be warned! She also takes us further on the journey as the body decays to the point where she is standing over it, scalpel raised for the old Y-shaped incision we see on CSI; though as she explains such programmes are far from accurate, not that anyone with any sense would think they are - glamorous people flicking their hair all over the samples etc and walking all over the crime scene.

Her getting up close to the final hours and minutes of the corpus delicti is given a personal slant in the case of suicides. The author has a real issue with suicide (her father killed himself when she was a child so it's understandable) but those planning suicide might think twice when they read the agony involved in some deaths that appear quick and painless to the general public: this may be her intention. Her anger at those who can be seen to throw away their lives and break the hearts of their families is palpable. For example, jumping off high buildings is not the quick dramatic death you may think, as bits of you bounce off and are strewn about the place on the way down while your brain remains conscious of your dismemberment until the ground, as it were, breaks your fall. But car crash victims and those who are in the wrong place at the wrong time or are murdered are similarly described, only without the anger. She is quite lively in her descriptions and of course not massively sentimental, but she does show more empathy with the families of the dead, especially those of suicide victims.

Apart from all we learn about being boiled to death (her personal choice of Worst Possible End, one to be avoided, folks, if you didn't already know but if you read this book you know a lot too much about why) we also learn about a major disaster from the inside. She was in this job when 9/11 happened. I had had the impression that the falling towers more or less literally pulverised the people in them and they were nothing but dust. This book put me right. The sheer scale of the work involved collecting, identifying and organising the vast number of body parts of all shapes and sizes was incredible. Every finger had to be treated as if it was a body as it may have been all that was found of an individual. Very impressive, the organisation and reaction to this overwhelming shock to a nation not used to being under attack on its own soil.

While all this dying and decomposing was going on, she had a family. Her husband, and co-author of this memoir, took over the day to day childcare, and happy family stories also fill out the picture of their life and Melinek's personality at this early stage of her career.

I have been studying forensic pathology as part of my work and have worked with dead bodies, dissection and brains, but anyone who's curious about the physical side of the universal human experience of dying could find this utterly fascinating. I was enthralled and enriched by it I have to say.

Oh, and she confirms something often used in sitcoms as a threat to women who live alone with cats - 'you'll die alone and the cat will eat your face' - it's true folks. As she says, your faithful dog might lie starving by your body mourning your loss, but your cat will tuck into your lips and eyes, and then the rest of your face before moving on to parts less delicate, as soon as it feels a bit peckish. She has seen the results. But then true cat people of both and all genders will simply be relieved to know their pets won't go hungry while they lie undiscovered until the smell alerts the neighbours.

Valerie Laws
valerielaws.com
My new book out today: THE FACEBOOK OF THE DEAD
Posted by Lydia Bennet at 00:00