My Heart is My Own: The Life of Mary Queen of Scots, by John Guy 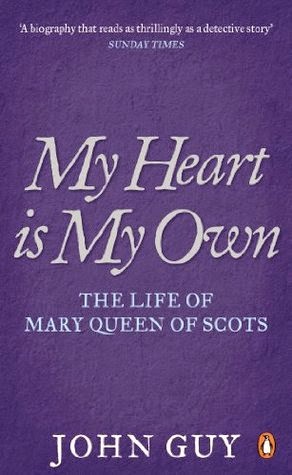 Centuries after her execution, Mary Queen of Scots remains one of the most divisive and enigmatic figures in British history. Was she manipulated and betrayed by those around her? Or was she conniving, untrustworthy, and perhaps even a party to the murder of her own husband?

Those wanting to find out the truth (insofar as “the truth” can be recovered after so much time) could do far worse than to read John Guy’s scholarly, masterful biography. Guy presents Mary as a sympathetic, generous woman who was actually – for a short period, at least – also rather a shrewd political leader. The Scotland of which she was Queen was a divided place, torn apart by competing religious, political and familial factions. She lacked the support of a loyal nobility (one of the considerable advantages possessed by Queen Elizabeth, who is, of necessity, also a major presence in the book). She perhaps did well to hold the country together for as long as she did.

Where did it all go wrong for Mary? Perhaps it all began with her marriage to Darnley – a good husband from the vantage point of a monarch who wanted to bolster her claim to the English throne, but a disastrous one from a personal perspective. Darnley was selfish, scheming, and an inveterate plotter, and while Mary almost certainly had no direct involvement in his assassination – she actually stood to lose a great deal from his death – she could hardly have been expected to mourn the passing of a man who had proved such a disappointment to her.

It was, though, with her marriage to Bothwell that Mary’s tottering reign began to utterly crumble. Bothwell himself is presented as a more rounded figure than is usual – both rough and smooth, he could boast a French education and was charming when it suited him, but he also placed personal ambition far above his feelings for Mary. By marrying him, Mary hoped to unite her factious nobles; in fact, she just exacerbated the country’s internal divisions, and probably sealed her own doom.

Whatever Mary’s flaws and mistakes, however, she ultimately comes across as a warm-hearted, well-rounded woman who might – had things been just slightly different – have been a uniting, rather than a dividing, force. Her accomplishments are not glossed over: despite her personal commitment to Catholicism, she was tolerant of differing views (the same cannot always be said of her opponents, most notably the Protestant preacher John Knox). During her brief reign, she could on occasion be every bit as astute a politician as Elizabeth, which counters her usual image as a woman ruled by her heart rather than her head. Ultimately, though, this was a woman destroyed by in-fighting, political machinations, and the misogyny of her own times. Well worth a read for anyone interested in this most charismatic of monarchs, or in Scottish or British history in general.
Posted by Mari Biella at 00:05

Email ThisBlogThis!Share to TwitterShare to FacebookShare to Pinterest
Labels: biography, history, John Guy, Mary Queen of Scots, My Heart is My Own