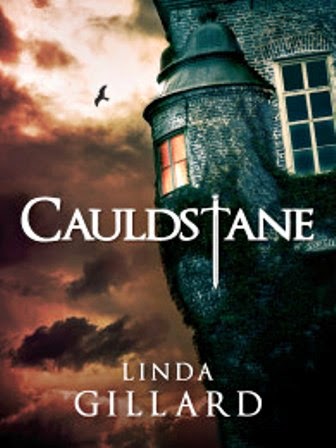 This is the first novel by Linda Gillard I’ve read, despite her being, so I understand, one of the most popular author-publishers around today. I really don’t know why it took me so long, but I’m very glad I finally made a start and read Cauldstane. The writing is easy, fluid, and the story well-told and compelling; I found myself believing absolutely in Cauldstane Castle and its highly diverse group of inhabitants.

Cauldstane is, in the words of the author, “a gothic novel in the tradition of Daphne du Maurier and Victoria Holt.” The story follows professional ghost-writer Jenny – or J.J. Ryan, as she is professionally known – as she travels to the remote Cauldstane Castle in the Scottish Highlands to meet the Laird, the adventurous and utterly charming Sholto MacNab. Jenny has been employed to write his autobiography, and in order to get to know him and learn about his life she plans to spend a while living in the household, which comprises Sholto, his sons Fergus and Alec, his sister Zelda, and Wilma, the housekeeper and home-baking enthusiast. In many ways, Cauldstane is a comfortable, and comforting, place: Wilma delivers regular snacks and drinks, meals are plentiful and generous, and the surroundings charming and full of character. Yet the castle is also something of a museum, a place where the detritus of centuries is stored. The MacNabs, as is often the case in Gothic fiction, are oppressed by the weight of their own history, and troubled by their future prospects, or lack thereof. The castle, and the lifestyle of the family, are “a building and way of life in its death throes.”

Cauldstane is beautifully described, to such an extent that I thought of it as a real place while I was reading. The problems inherent in the management of the place – its size, the cost of running it, and the fact that the MacNabs simply cannot afford it – do not diminish its romance. But this romance comes at a terrible price. “Let Fear be Far from All” is the MacNab motto, but in reality this is a family living in an almost constant state of nagging fear. Sholto has lost both his wives, and his son Alec has been widowed; there’s even a curse that supposedly dictates that any woman marrying a Cauldstane heir will either die young or remain childless, which makes MacNab males something of an unappealing prospect to many women. Interestingly, the MacNabs themselves are sceptical about the existence of the curse, but it continues to throw a shadow over their lives; more interestingly still, the curse is never actually shown to be false during the novel, and indeed is seen to be fulfilled time and again. This in turn raises a question: can somebody be negatively affected by something that they do not believe in, something that might not even exist?

An enormous portrait of Sholto’s second wife, Meredith, dominates the interior of the castle – as does the woman herself, despite having died several years before. In an echo of du Maurier’s Rebecca, Meredith’s hold over Cauldstane and the people living there actually seems to have increased following her death. And Jenny is soon affected too, as her association with the MacNabs becomes more than purely professional. The growing attraction between her and Alec could come at a high personal price: somebody doesn’t want her at the castle, and will go to great lengths to force her out.

Many elements combine to make Cauldstane such an enjoyable read. One is the setting: the lonely, atmospheric castle is almost a character in its own right, and tends to dominate the human characters (another common element in much Gothic fiction). Yet the human protagonists are rounded, realistic and, for the most part, sympathetic. Sholto was my personal favourite, but Jenny too was an interesting and engaging, if atypical, heroine: she’s forty and unmarried, and not altogether happy about this; she’s had some rather vague psychological problems in the past and continues to worry about her mental state, which has interesting ramifications when much that happens to her at Cauldstane seems calculated to cast doubt upon her sanity. And she has her own secrets – not as dark as those of Cauldstane, but ones that continue to haunt her.


I understand that Linda Gillard was once traditionally-published, before her publishers allowed her to go the indie route. That’s a decision I simply don’t understand from any point of view: Gillard writes not only well but in what I imagine to be a highly marketable vein. Happily, she’s now self-publishing, so no one need go without her books. If you enjoy Gothic romance or sheer escapism, you might want to pick up Cauldstane. In the words of one of the characters, “it has all the right ingredients . . . Money. Class. Sex. Scandal. And a big country house.”
Posted by Mari Biella at 00:30