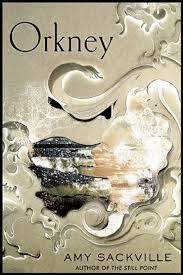 After reading Peter May's dark thrillers set in the Hebrides, I was definitely in the mood for more about remote Scottish islands.  I bought Amy Sackville's Orkney a while ago, but (after one or two false starts) I hadn't got round to reading it.  The night of the Great Storm over Britain definitely provided the right atmosphere - the TV screens, even in Italy, were filled with images of surging tides and wild winds.

I loved Amy's first book, The Still Point, and really rate her writing - poetic, atmospheric prose of the kind that isn't fashionable in main-stream publishing these days. Fortunately Amy's published by Granta who like the experimental and unashamedly 'literary' - one of the best of the small 'boutique' publishers.

Orkney has no plot, only 2 main characters (a few walk-on parts) and feels as though it's written in real time.  But the prose compels and draws you in the further and further you go - rather like the sea around the island.

Richard, an elderly academic, has married one of his students after a very short acquaintance.  She has no family he is aware of and no friends.  But we only have Richard's word for that - he is obsessed with her and can't see anything very clearly outside what his young wife calls 'the frame' he has drawn around her.  In Richard's first person journal, her name is never mentioned.  She has no identity other than the one he creates for her.

Richard has brought her for a honeymoon on the Isle of Orkney - to a remote cottage where he is going to make endless love to his wife and work on his book about mythologies.  They are his speciality - particularly where they relate to women:

'Transformations, obsessions, seductions;  succubi and incubi;  entrapments and escapes . . . Curses and cures.  Folk tales and fairy tales retold.  And all the attendant uncertainties, anxieties and aporia. Do I wake or sleep? Fantasy and phantasm.  Beautiful terrible women. Vulnerable lonely cursed women.  Strange and powerful women.  It's an old obsession.'

And it's one that should worry his wife.  Everyday she goes to sit on the beach to watch the sea.  And Richard watches her from inside the window.

'She's staring at the sea now.  My young wife.  There she stands on the barren beach, all wrapped up in her long green coat, among the scuttle and clatter of pebbles and crabs.'

Gradually more information about her past emerges - her father had disappeared when she was a young child - perhaps lost at sea.  She is fascinated by tales of Selkies and Finfolk - men and women who come from the sea to land, but must always go back again.  She can't swim and dreams of drowning, night after night.  The novel creates a real intensity and claustrophobia as the relationship between the two is exposed within the four walls of their tiny cottage buffeted by wild Atlantic gales.

'I lay awake for hours, on my back, listening, eyes open or closed, I could not tell, an equal darkness within and without.  Our bed a berth in a boat, below deck, the sea pressing up at the window and rolling and moiling below us;  the fish swimming by the glass indifferent;  tiny shrimp coiling and stretching in meaningless Morse code;  all the sightless, glowing life of the ocean floating past. A Leviathan's eye, filling the portholes, peering in.'

I won't spoil it by writing about the ending, but I'm still speculating about just how reliable Richard is as a narrator - he has a tendency to see everything one way and can't be contradicted.  The clues to what is happening are in the fairy tales, re-told by firelight, the myths and superstitions that inhabit the abandoned hearths of the island.