Are We Human, Or Are We Dancer? Ruby Reviews Lifeform Three by Roz Morris #Bookreview 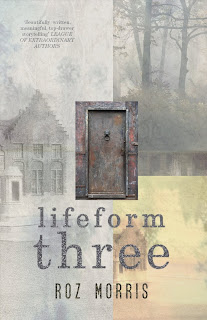 It’s been a long, long time since I read a science fiction novel. Maybe thirty years. The closest I’ve come to doing so was the futuristic part of My Memories of a Future Life by the same author. I knew from MMOAFL that Roz Morris was a lyrical writer and I trusted her when I requested and received an advance review copy of Lifeform Three. My consternation in realising I had picked up a dystopian novel, and that the MC Paftoo was a synthetic lifeform, only stayed with me until the end of the first page, and then I realised the magic had begun.

Lifeform Three is a totally believable, some might say inevitable, scenario. Global warming, lands lost to rising sea levels, increased urbanisation and total reliance upon interactive technology. Synthetic bods manage theme parks based upon historical artefacts. When the sun goes down, the power goes off. Except something is different about Paftoo. To paraphrase the blonde who asked “Do dogs have brains?” the reader is soon thinking “Do synthetic lifeforms have souls?”

Then things start to get creepy. Paftoo has been here before, we’ve all been here before. Groundhog Day. But there’s learning to be had, precious learning that can be tragically erased by a group “Sharing”. After a few chapters you’ll be begging the story not to put Paftoo through a Sharing.

Morris does a fantastic job attributing characters to these near identical androids. Although Paftoo is the one who breaks the rules, my favourite character is the enigmatic Tickets. Part ballerina, part nightclub bouncer, he holds the key to the story. He knows where that missing door on the cover of this book is.

Lifeform Three doesn’t give us all the answers. It leaves plenty of room for the imagination. I really didn’t want this book to end, it’s that good. The emotional involvement reminded me of Never Let Me Go by Kazuo Ishiguro, but Lifeform Three is much more joyous and less tragic.