The Drover's Dogs by Susan Price, reviewed by Bill Kirton 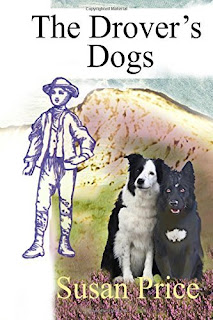 The story is built around the old traditions of crofting and droving in Scotland. Drovers and their dogs keep the cattle moving on long treks from the Highlands and Islands to the markets on the other side of the country. As they then stay to oversee the selling of their stock, their dogs make their own way home. This book reverses the process in that we first experience the dogs’ return, which, serendipitously for Sandy, a young boy running away from the ill treatment he’s been getting from the farmer to whom his mother sold him, coincides with his escape. It also reverses beautifully the assumptions we have about the relationship between humans and dogs because, as the author makes clear, it’s the two dogs who are in charge on this journey as they herd Sandy along the route they’ve chosen. They’re going home and taking Sandy with them.

To avoid spoilers, I’ll say nothing about how the story develops once they reach their destination. It does, though, involve yet another reversal as the dogs leave home again and Sandy goes with them; a new outward journey for them, a return for him. Add to all this the fact that I read the whole book on my own 2½ hour train journey from the East of Scotland to the West and there’s a satisfying symmetry about the whole thing.

It was a joy to read. There were hardships aplenty for Sandy, and the author spares us little of the deprivations the poor had to suffer. The precarious and often cruel nature of rural life in 19th century Scotland is carefully sketched. The characters, including those of the dogs, are conveyed in light but telling touches, and the overall style has a warmth and a tenderness that, for all the indignities that Sandy has to suffer and the unfairness of the laws governing child labour, hints at where true nobility and humanity lie. This is the Scotland of myth and romance, but this author knows better than to trade in stereotypes. She tells the whole story, the good and the bad; hinting at the social and economic changes that affect the whole way of life of these people and will affect them even more powerfully as new ways of travelling and doing business are developed. But at the story’s core, it’s always the people who matter: Sandy, the drovers, the crofters, the families, and of course the dogs. It’s a realistic, unsentimental yet happy tale, made all the more touching by the fact that the narrator is Sandy himself, but as a grown man who can convey the immediacy of his sufferings and joys as a boy but put it all in the wider context of his own maturity and the changes he has seen in life in Scotland.


Forget about Brigadoon. This is really what it was like. And it’s a terrific story, beautifully told.
Posted by Bill Kirton at 00:05