Black by Rose by Andrew Barrett: reviewed by Chris Longmuir 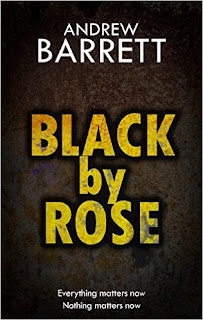 Black by Rose was a real page turner of a book. It follows several plot lines, and at times I found it difficult to figure out who the main characters were. This was not helped by a prologue that featured a murder for which a woman deliberately takes the blame and serves time in prison to protect her female lover. This plot line then lapses and does not return until much later in the book.

After the prologue the plot features on the murder of an undercover policeman and his family. During the course of the investigation we meet the forensics team, the police and a particularly vicious criminal family. I liked the multi-viewpoint style which allowed me to see into the minds of all of these.

However, the characters who really drew me in were Eddie and Ros and the obstacles to their love for each other. They are both part of the investigation and work in a forensics team with the police.

This is nail-biting stuff, action packed, full of pace and suspense. If it had a fault it was only the delay between the events in the prologue and the follow up of that part of the story.

You can find the book at:-