The Lion's Mouth by Anne Holt reviewed by Julia Jones 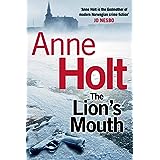 This is the first Anne Holt novel that I have read and I am going back for more. Jo Nesbo is quoted describing Holt as 'the Godmother of modern Norwegian crime fiction' and judging only from identikit cover design – grey mist, loneliness, treacherous ice, snow-encrusted gun, red typeface to hint at fresh blood – readers could be forgiven for expecting another volume of semi-standardised Scandinavian noir.
The Lion's Mouth is not like that at all. It's set in the political heart of Oslo with scrupulous descriptions of politician's offices, newspaper offices and several individual homes. There's scarcely a frozen waste to be seen. Admittedly one dodgy character dies in an avalanche and another swims naked across a lake but the subliminal message of the book is that these are the aberrants, these people and their landscapes are where civilisation and common humanity is not. The meaningful heartbeat of life lies in the city.


There is a striking (and welcome) absence of gore in The Lion's Mouth. It's more a novel of detection than a thriller and has many of the characteristics of a locked room mystery. John Dickson Carr is referenced early on. There are clues – a lost pass, an absent shawl, a filched pillbox and a gun of strikingly unusual design. These are spaced very effectively through the novel keeping the sense of action going without the need for repeated violence. This is not, however, an arid read. Alibis are established without too much minutiae and some of the clues turn out not to matter after all – or rather they matter in the field of human personality and relationships, not criminal investigation.
The Lion's Mouth is a political novel and here Ann Holt writes with effortless authority. She is a lawyer who has worked for the Norwegian Broadcasting Corporation, the Oslo Police Department and served as Minister of Justice for a few months before ill-health forced her to resign. The Lion's Mouth is written in collaboration with her former Secretary of State Berit Reiss-Andersen, granddaughter of the lyric poet Gunnar Reiss-Andersen and currently president of the Norwegian bar association and a member of the Nobel Committee. This is a novel with pedigree.
Yet once again it refuses to be pigeon-holed. 'A story of lies, intrigue and politics. The Lion's Mouth asks questions about those who hold power and how far they will go to use it.' This is press-a-button blurb writing, about as lazy as the cover design. Yes, there is a sleazy and credible political scandal involving procurement trade-offs with an East German pharmaceutical company and yes, there is one Government minister who is playing the media machine unscrupulously for personal gain but the central theme of the book is responsibility. Idealism even. These politicians are tired and human: they accept the system in which they work and know that this will involve compromise. The bottom line, however, is altruism, not self-seeking. This is not a Jeffrey Archer or a Michael Dobbs. Don't you understand, Ruth-Dorthe, that you are tasked with managing the health service on behalf of 'the Norwegian people'?
I loved this aspect of The Lion's Mouth and would recommend it as a truthful, un-sensational, insider's portrait of working life in government. The grotesque, muck-raking journalist Little Letvik is an additional treat. Her awfulness is completely believable in context but still does not overshadow the main presentation of people doing their jobs within the structure of the state.
The final surprise of The Lion's Mouth, however, is that it is about an individual tragedy, not a power-crazed intrigue. It is this recognition of humanity within the machine that makes sense of the quotation from Gunnar Reiss-Andersen that serves as a preface. 'It's no use being a qualified zoologist once you're inside the lions mouth.'
To understand that quote you have, of course, to read the book. Holt's series detective Hanne Wilhemsen comes closest to guessing the truth though it is not she who reveals it. For me Hanne Wilhemsen was one of the few characters who didn't entirely convince. She is currently living in California with her lover Cecilia and only returns to Oslo in a holiday capacity once she hears that the Prime Minister has been discovered, shot. Her former partner Billy T. – gigantic, farting, back-thumping father of four boys by four mothers – is the much more active investigator. It maybe that I would feel more involvement with Hanne if I had read her earlier cases – or it could be that her pre-eminence as The Series Detective was not fully intended and once again this book is being forced into a convention that it doesn't quite fit.
(this review was first published on The Bookbag site. The Lion's Mouth is available in both print and electronic format)
Posted by julia jones at 00:00