Myra – Beyond Saddleworth by Jean Rafferty 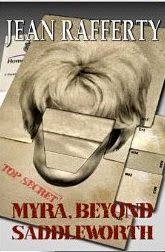 The words ‘Myra’ and ‘Saddleworth’ in the title will resonate with UK readers of all but the youngest generations but perhaps be neutral for those not familiar with what were known as ‘The Moors Murders’. The victims were children who were tortured and killed on Saddleworth Moor by Ian Brady and Myra Hindley between 1963 and 1965 and the case’s notoriety still persists. Hindley died in 2002 but here the author creates a fiction which suggests the death is a deliberate misdirection and, in fact, she’s released into the community with a new identity.

Given the hatred that’s always been directed at Brady and Hindley, it’s perhaps not surprising that news of this novel created some negative reactions. People assumed it was part of an attempt to rehabilitate Hindley and portray her as a ‘normal’ human being and, even if they didn’t, they objected that it might cause further distress for the victims’ families. Such reactions show a form of blind censorship, i.e. objections aimed at a book that was never written. Here, in the foreword, the author makes it clear that the book is in no way sympathetic to Myra Hindley or Ian Brady and writes unequivocally that it’s ‘an honest attempt to find out what kind of person commits such atrocities’.

First, then, let’s make it clear that it’s a compelling read. Hindley, Brady and the cast of characters who surround them are vivid creations, thanks to the distinctive things they say and do. The narrative is in the present tense so everything is immediate, precarious, unpredictable. There’s no feeling that releasing her has resolved anything and, given her character, she could send the central story in any number of directions.

And yet that’s misleading, because she’s only part of the narrative. There are several stories here – at least four ‘love’ stories, two of them involving Hindley – as well as examples of betrayals, adultery, deceit, illicit sex, lies, evasions and religious hypocrisy – all variations on everyday cruelties. Hindley and Brady’s involvement in evil was indeed extreme, unthinkable, and yet they don’t have a monopoly of it here. Evil is omnipresent in nature and in people. It pervades the narrative and is made more sinister by the author’s skilful use of the vernacular when letting us hear the characters’ words and thoughts. That throws up many examples of casual, unthinking cruelty. One character ‘thinks Hindley should have hanged. Or better still, be ‘chopped up into little pieces while alive and boiling oil poured over her’. Later, in a phone call to Beth, Pat asks ‘How could you do that to a child?’ Scum. Perverted, whereupon Beth touches the photo of her son ‘for luck’. And that’s the same son who joins the military and, egged on by his lover, abuses, humiliates and debases Iraqi prisoners. So there’s no shortage of evil impulses, and morality seems to be negotiable.

There’s a chapter called ‘the same species?’. It refers to foxes and dogs but its applications to people are self-evident. Indeed, the fox is a recurrent leitmotif and, with his vixen, evokes the pairing of Brady and Hindley. Regularly through the narrative, the fox appears, protecting and feeding his vixen, symbolising power, control. Or else we hear its ‘hoarse, unsettling cry’ which sounds ‘as if it's calling from another plane of existence’. And then there’s the organised bestiality of the foxhunt, which appals Hindley. Ironically, she ‘doesn’t approve of cruelty to animals but this is a British tradition’. It’s just one of the frequent examples of ‘the careless cruelty of those who consider themselves to be the norm’ and it provokes the chilling reaction from Hindley: ‘There’s no respect for life here, no care, no soul.’ The final irony of the hunt is that it’s Hindley who’s blooded.

The fox isn’t the only example of the thematic use of animals. One narrative thread is conveyed almost exclusively via emails or texting between two lovers, Hal and Pat, whose chosen names are wolf and lynx. Pat writes that, in bed, Hal is ‘ferocious, insatiable, a BEAST!!!!!’ Themes of animal cruelty and beauty are linked as the exchanges show that love and death are close companions. Pat says of Hindley, ‘I hope she rots quickly’ and her words are followed by the reply ‘I love your fierceness’ which leads swiftly to Pat’s desire to ‘make love  … till the sweat drips from our fur and we’re exhausted. I’ll lie along the length of you and lick the salt from your pelt and we’ll fall asleep together, satiated by love.’ It’s a world of the senses: of touch (of course) but also of sights, smells and perfumes and those ear-splitting shrieks in the darkness. It taps into the traditional romantic association of voluptuousness and death, sensuality and extinction.

Hindley, then, may be a monster but she’s living amongst people who themselves are far from innocent. Crimes are perpetrated to defend the status quo. Indeed, the text says ‘If only humans could be made innocent, but they know too much, want too much.’ And one of the characters, Jude, says of Brady and Hindley, ‘we are all like them. Which of us gets to go through life without hurting other people?’ We’re defined by our actions. Brady could rationalise his horrific acts (if rationalise is the correct word) as a statement of identity, but he has no control over how they are perceived. We all form opinions of one another which are instinctive and which we assume to be ‘true’, ‘valid’. And that highlights a seemingly simple, relatively innocent question that comes near the end of the book. To avoid spoilers, I’ll summarise it by saying that there were two people who came to be very close to Hindley in the course of the narrative and yet neither of them suspects her true identity. So the question is how did neither of them know? The text asks: ‘Shouldn’t they have nosed out the stench of her, the ugly, grave-crawling putridness inside her?’ Well, precisely. They didn’t. So how can there be such a distance between the inner monster and the perceived person? What value can we put on moral judgements? And why does the loathing engendered by the monstrous acts overwhelm with such ease any compassion we might have felt?

I’m aware that this is very long and yet there are many other aspects of this novel I haven’t touched on. It’s a compulsive read, carefully and beautifully written, which, while seeking to discover the real Hindley and her motives, conjures up a broader context of a society in which civilisation is not much more than a tacitly agreed veneer.
Posted by Bill Kirton at 00:00