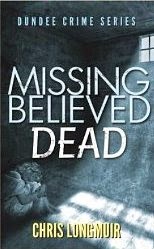 If you want to know how to write an opening which draws the reader in, check out the first chapter of Missing Believed Dead. Be warned, though – you’ll want to read on and on.

This is the third in Chris Longmuir’s series featuring D.S. Bill Murphy, whose personal life is still something of a mess but who cares a lot about the victims, potential victims and collateral damage of the crimes he investigates. The arrival of a new D.I., Kate Rawlings, who’s unimpressed by his apparent sloppiness, adds to the pressures on him. Most of all, though, the focus is on the family of Jade, a 13 year old girl who disappeared five years before, the victim of an online predator. But there have been other, more recent murders and Murphy suspects they’re somehow linked with the family, too.

With her usual fascination for the darker recesses of people’s psyches, the author shows us the separate torments of Jade’s mother, sister and brother, each of whom is scarred by her loss. And all the time, in the background, there’s the mystery of another abducted teenager for whom the clock is ticking inexorably towards what threatens to be a painful, fatal outcome. Altogether, it’s a dark, scary picture of an apparently ordinary world of ordinary people whose actions and motives betray the demons within them.
Posted by Bill Kirton at 00:05