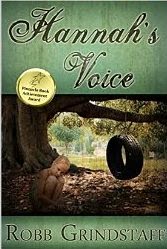 This is a thoughtful, excellent, well-constructed read which deals with important issues in both personal and public dimensions.

It starts at the individual level, narrated by the Hannah of the title. The author is careful to keep the register consistent with the phraseology, vocabulary and perceptions of the then six year old Hannah but still manages to suggest the many things bubbling beneath the surface which will appear later and contribute to the book’s expansion into a broader commentary on religious and socio-political manners.

Hannah stops speaking when she’s six years old. It’s perhaps an extreme reaction to the situation in which she finds herself and yet the author sketches the circumstances that lead up to it in a way that makes it understandable, even inevitable. The figure of Hannah is attractive, sympathetic and quickly establishes a sort of pact with the reader. She maintains her mutism for the next twelve years but, in spite of her calm reasonableness, its divisive impact is felt in her family, the local community, and eventually throughout the , with presidential candidates becoming involved in debates about its significance and rival factions taking to the streets to voice (NB) their beliefs.

When a young child is suddenly ‘struck dumb’, it encourages speculation in many areas. In this case, occurring as it does in a society of believers and churchgoers, the tendency may be to see it, perversely in each case, as the work of the devil or a message from God. Equally, there will be those who assume some abusive trauma is to blame and start enquiring into family relationships. Then, when events draw it to the attention of a wider public, theories will increase exponentially and the furore will escalate way beyond its original source. The result is that questions are asked of the child and the young woman she becomes which bear no relation to her own inner truth and which increase her determination to remain cut off from their world and their words.

The series of events which lead to Hannah’s decision to stop speaking is handled with tenderness and a clear understanding of how a child’s mind works. She’s a good girl, with a simple faith which sanitises death by seeing it as moving from ‘here’ to stay with Jesus and the angels. She tells the truth and is bewildered when adults ask her the same question over and over when she’s already given them her answer. Her dead Daddy, whom she loved so much, told her to ‘always listen to people’s words very carefully to make sure [she] knew what they really meant’. So when the headmaster, with his own agenda and preconceptions, asks the same question repeatedly, giving her several chances ‘to tell the truth’, it disorientates her because that’s exactly what she’s been doing. For her, as for most children, words mean what they say; sub-texts and coded messages don’t exist. When her Daddy sang Amazing Grace to her at bedtime, rather than calm her, its effect was to make her ‘lie there awake for hours, worrying about getting lost or going blind’.

Without labouring the point, the author offers plenty of examples of the miscommunication that’s behind her mutism. As well as the headmaster and her own mother, there’s the counsellor who’s seeking confirmation of her own belief that Hannah’s been abused and the fire investigator who believes the blaze was started by Hannah’s friend Daniel and who ‘asked five or six different times, in five or six different ways, about where Daniel was and what time it was when we heard the loud pop’. All these questions are meaningless.

In such a context, the exchange that was the main reason for her decision to be silent, has a very sophisticated irony. It happened at Sunday school. Hannah had prepared the lesson and read her Bible and she had a question. The teacher, the lesson and the picture all showed Jonah being swallowed by a whale. ‘But’, says Hannah, ‘the Bible says it was a great fish. Whales are mammals, not fish. Did the Bible make a mistake?’ It’s an eminently sensible, fair question and yet it provokes a kind of panic in the teacher, which is then exacerbated by a hilarious set of exchanges between the other pupils, which ends in the exclamation ‘You’re a dick’. But it’s the teacher’s version of the episode, which she recounts later, that turns it into a chilling harbinger of the strife and violence that’s to come. According to her, Hannah had ‘completely destroyed the impact of the lesson on those impressionable minds’. ‘No telling how many little souls were forever lost because of her,’ she said. The enormous gap between the reality of the event and its assumed impact is grotesque.

Before getting to the later stages of the book, there are two more interrelated themes to note. Hannah’s mother is clearly not quite normal and lots of her quirkiness is manifest in her attitudes to dirt – both literally and in terms of its symbolism. She liked things clean. ‘We had to clean the house after we finished the dishes,’ says Hannah. ‘After I cleaned my room, I dusted the living room and scrubbed the bathroom sink and toilet. Momma liked the bathroom so clean no one would ever know we S H I T in there.’ The spelling of the ‘dirty’ word is to avoid her actually saying it – even in writing. When the children had their post-Jonah exchange, the teacher called it ‘trash talk’ and, on the occasions when Hannah unknowingly used a forbidden word, she had to wash her mouth out with soap. Even lies qualified for the same treatment. Although Hannah never told any, she was still told to ‘go brush those nasty little teeth before that lie sticks to them and they rot out of your head’. These are frightening, terrible images to put into a child’s mind.

And the obsession with dirt is cleverly used by the author to highlight the workings of the book’s morality. According to Hannah’s mother, the school has accused her daughter unjustly of various misdemeanours so, when the two of them leave the school, they shake the dust from their feet ‘just like Jesus commanded his disciples to do when they left a village of unrepentant sinners’, an action given a subtle twist later when, after some violent exchanges between opposing factions in church, Hannah says ‘as soon as we hit the sidewalk, I shook the dust off my feet’. The morality being discussed is far from straightforward.

The vocabulary of good and bad is reflected, too, in that of colour. Hannah’s hair is ‘dirty blonde’. It’s muddy outside the school. A girl who fell, banged her head and died while skipping got mud in her hair. Hannah says later that her ‘empty desk whispered to me. Cherubim. Seraphim. . Suffer. Resurrection’, while the empty desk of an enemy of Hannah’s ‘creaked and groaned lie after lie’, causing Hannah to write on her tablet "Beelzebub. Jezebel. Lucifer. Brimstone. Torment. Gnash. Chaff." Significantly though, her own desk ‘remained silent’.

So, at the centre of the book is the fact that Hannah won’t speak because she knows what she says will be misinterpreted or not believed. The value of words is questioned and yet the huge paradox is that, because of her silence and her ‘difference’, rival factions arise which, along with counsellors, media people and others, all desire nothing but words from her – words which they’re convinced will reveal truths.

There’s irony, too, in the nature and inspiration of the rival factions. One believes her to be carrying a message from God which she’ll reveal in His own good time while another sees her as the spawn of the devil and wants to destroy her. Both base their ‘faith’ not on anything specific that she said but on two sketches she drew – one angelic, the other evil. Then there’s a group of anarchists whose leader was inspired to form a movement when she saw Hannah interviewed on TV, morphed her into a victim of society with courage but no voice and, as she said, ‘that’s when I realised I had words’ so she formed Voices for the Voiceless.

So Hannah’s decision as a six year old has brought her to oppression by religious and social fanaticism, the intrusions of politicians and an FBI investigation. And yet all she wants is to find her mum and be the normal young woman we know she is.

There are other themes, other uses of imagery which thread through the book, all contributing to and illuminating its complexity. The author handles them all with assurance and an apparent artlessness, maintaining it as the story of one young girl and yet, at the same time, offering a profound analysis of some of the energies, good and bad, which drive Western and especially American culture.

In the beginning may have been the Word but problems began when it was interpreted. Among the many other paradoxes with which Grindstaff plays is the power and yet potential unreliability of language. Words are so easily misunderstood or distorted to fit preconceptions. In the end it comes down to ‘there’s nothing either good or bad but thinking makes it so’, all encapsulated and simultaneously refuted by the glorious use of the word ‘Pancakes’ and a ‘dirty’ word as Hannah eventually breaks her silence.

‘Pancakes. I said I want the goddam pancakes.’

It’s a book to read for pleasure but also for enlightenment.