The Death Game by Chris Longmuir; reviewed by Kathleen Jones 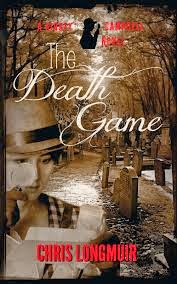 
Missing children, black magic in a graveyard, and an orphan’s refuge that is anything but . . .  The beginning of Chris Longmuir’s new novel promises a compelling plot. Add in a fascinating historical setting and you know you’re in for a good read.

The Death Game is set in Scotland just after the first world war.  The police force is a male enclave, handling matters deemed unsuitable for a decent woman to know about.  It was still a period when women were treated like children, to be protected and kept innocent and naive - though in reality rendered helpless and ignorant.  But at the end of the war a new women’s police force was set up - called the Women’s Police Patrols, drawing its recruits from the Women’s Police Volunteers and the Voluntary Women Patrols.   Many of the women in these groups were suffragettes.  The Women’s Police Patrols were more formal, wearing a uniform designed by Harrods. Soon its trained members were being deployed to regional forces, although not without a considerable amount of resistance. They were usually given the job of escorting lost children and dogs, dealing with prostitutes and taking statements from women.

Chris’s heroine (I will use that word dammit!), Kirsty Campbell, is sent to Dundee, where she encounters not just the hostility of the men she’s supposed to be working with, but also has to confront one of the most traumatic episodes from her past.  We soon see why she had to leave Dundee and why she chose the police service as a career.

I thoroughly enjoyed finding out about how the first police-women worked and the barriers they had to break down to be accepted (though modern police-women might suggest that some are still there). The historical setting is authentic and well-researched.  Kirsty Campbell is a fascinating character and I’m glad that there are going to be more novels featuring her as one of the first female detectives.  Kirsty’s personal situation is suitably complicated too - another hook to draw the reader into the next book.

A good read and well-recommended.

Chris Longmuir lives in a small seaside town on the east coast of Scotland. She considers herself a Scot because although she was born in Wiltshire she has lived in Scotland since the age of two. She is a crime novelist as well as a short story and article writer and has also published a very well received saga - 'A Salt Splashed Cradle'.   In 2009, Chris won the Dundee International Book Prize with her crime novel 'Dead Wood'.  She admits to ‘a lifetime addiction to the written word’.
You can find out more about Chris and her books at her website which is http://www.chrislongmuir.co.uk/

Kathleen Jones writes novels, biography and poetry and is published both traditionally and independently.  You can find her website at www.kathleenjones.co.uk  and she blogs regularly at 'A Writer's Life'.