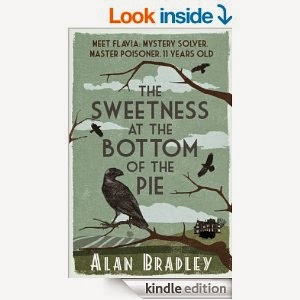 MEET FLAVIA: MYSTERY SOLVER, MASTER POISONER, 11 YEARS OLD  I discovered this book in the old-fashioned way. It was recommended by an independent bookseller who survives, as I used to do, by a judicious mixture of knowing the tastes of her customers and persuading them to share her own enthusiasms. Catherine Hawley is primarily a second hand bookseller, based in Yorkshire, who runs an on-line list specializing in literary criticism, history, philosophy and always has a good selection of titles costing less than £1. You can take a look at C.L.Hawley books or sign up for her newsletter as I do. She also runs a reading group for 9-11 year olds and writes about some of her selections in a separate blog Gifted. It's intended for teachers and librarians and tries to help them avoid the wrath of protective parents by assessing titles in terms of their 'peril' factors, their handling of relationships, death, racism, Anything Else. It's actually not proscriptive but helpful and rather interesting. (I must declare an interest as my Ravelled Flag has recently been included.)
The Flavia de Luce series has not, as yet been reviewed on Gifted but on the evidence of this first volume, there's no reason why the stories should not appeal to talented child readers as well as to adults. The heroine is an opinionated 11 year old with a passion for chemistry. She lives in a gorgeously un-realistic English country house, apparently in the 1950s, with her widowed father, two older sisters Ophelia and Daphne (Feely and Daffy), a cook who makes custard pie in the full knowledge that all of them dislike it and a devoted, possibly murderous, shell-shocked, gardener. All are mad in their separate ways and the hapless Amazon reviewers who complain that the series is "not realistic" have spectacularly missed the point.
Flavia is precocious, pretentious and insatiably curious -- her "particular passion is poison". At the beginning of the book her main outlet for her talent is defending herself in her war against her older sisters but the delivery of a jack snipe with a rare stamp impaled on its beak plus the discovery of a body in the rose bed sends her hurtling round the countryside on her trusty bicycle, Gladys. The plot is sufficient and the cast of characters "cosy" in a detective novel "Golden Age sense. There's the friendly, slightly deferential policeman, the spinster librarian, the obsessive prep school headmaster, the barmaid but the reason to read (and I suspect to cherish) Flavia de Luce is for the narrative style.
Whenever I'm out of doors and find myself wanting to have a first rate think, I fling myself down on my back, throw my arms and legs out so that I look like an asterisk and gaze at the sky. For the first little while I'm usually entertained by my 'floaters', those wormy little strings of protein that swim to and fro across one's field of vision like small dark galaxies. When I'm not in a hurry I stand on my head to stir them up, then lie back to watch the show as if it were an animated cinema film.
There are six titles in the series, so far, and this first volume is full of hints that there may be a complex over-arching plot connected with the death of Flavia's aviatrix mother. The titles are idiosyncratic and I'm currently awaiting the arrival of vols 2 & 3 The Weed that Strings the Hangman's Noose and A Red Herring Without Mustard. They will come with the stateliness of paper and snail mail. All are also available on Kindle at the click of a mouse. Independent writer-publishers and independent readers must not, however, completely forget the contribution of independent booksellers.