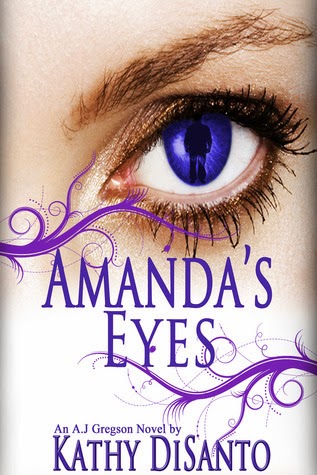 In the beginning, it was pitch black.

And there was pain. But distant, like a memory. Or a threat, prowling the far reaches of the darkness.

Weightless. Suspended in the void. No up, no down. Nowhere.

Have you ever wondered what it would be like to wake up in hospital after an accident, with no clear idea of where you are or what has happened to you? It’s an intriguing, if frightening, scenario, and one that is, understandably, rather beloved of writers and filmmakers. It’s also the starting point of Kathy DiSanto’s Amanda’s Eyes, a pacy and exciting thriller set in the year 2075.

For a novel set in the near-future, Amanda’s Eyes is not especially futuristic. Several references are made to technological advances and social developments, but these do not dominate the story; in fact, the fictional world in which the story takes place is, in essence, not so very different to our own. However, one area in which great advances have been made is in medicine, which is relevant to the protagonist and her story.

Amanda – or A.J. Gregson, as she is known professionally – is a police journalist. She has hitherto, by her own admission, had “a charmed existence. Smooth sailing, baby, for thirty-two years.” Headstrong and brilliant, she is utterly devoted to her work, and seemingly unstoppable – until she finds herself in hospital, blind and weak and suffering from a mild case of amnesia. This section, rather impressively, never drags; in fact, as we learn about Amanda’s life and the incident that put her in hospital, it picks up an impressive pace. As it turns out, Amanda was badly injured in an explosion while investigating a ruthless group of assassins, known as the Ferrymen. Specifically, her eyes were destroyed; but, this being 2075, medicine is soon able to provide her with replacement eyes, created from her own DNA.

However, as Amanda soon finds out, a new pair of eyes is not the only thing she has gained. She has also developed something akin to “second sight”, whereby she can – occasionally – see beyond the front people present to the world and glimpse the real person. (In case you’re rolling your eyes at this point, don’t worry: DiSanto is skilled enough to allow us to suspend our disbelief.) This new ability is crucial to the novel.

Amanda’s crusade against the Ferrymen is now personal – “Everybody says experience is the best teacher,” she says, sadly, “but nobody tells you how ruthless she can be” – and it isn’t long before, with her newfound ability, she receives an indication as to where the main power behind the Ferrymen lies. That power is in fact in the hands of someone completely unexpected, who’s been hiding behind a façade of philanthropy and bonhomie for years, which sounds depressingly plausible in this day and age.

Teaming up with Agent Jack Eagan, Amanda sets out on the Ferrymen’s trail, and what follows is something of a rollercoaster ride, involving elements of crime, sci-fi, mystery, and even a very slight hint of romance. DiSanto certainly knows how to command her readers’ attention; the book pulls you in and won’t let you go, dragging you along for the ride through each twist and turn. I found myself staying up late a couple of nights so that I could read on, oblivious to the fact that I was dead tired and had an early start the next morning – a sure sign of a successful thriller.

My only complaint about the book – and it’s a very minor niggle really – is the unsatisfactory ending (warning - very slight spoiler coming up). The narrative was hurtling toward an amazing showdown, and then – well, nothing, actually. Amanda loses consciousness just at the moment of highest tension, and the next thing we know we’re reading the Epilogue, and a quick précis of what actually occurred. I felt a bit let down; but then again, let it be said, if I’d been in Amanda’s situation I’d probably have passed out too.

As I said, this is a small complaint, and shouldn’t put anyone off. Amanda’s Eyes is a fabulous, genre-bending, fun read, and well worth its price tag. Recommended.

To buy Amanda's Eyes, visit amazon.com or amazon.co.uk.
Posted by Mari Biella at 00:30