The Suiting by Reb MacRrath


Back in 1988, Reb MacRath, writing as Kelley Wilde, produced the first version of this book and it won the Bram Stoker First Novel Award. What a start! But time passes and all writers feel an empty regret when something good and valuable seems finished, completed,  consigned to the past and the thrill of writing has gone, to be replaced by wistful thoughts of, 'Gosh, I was clever in those days.'

Well, one of the joys of independent publishing is that writers need no longer feel that. This was a notable book when it was first published: to see it rise again, rewritten, recast for a different age, the same yet subtly different, is a wonderful thing - and it's possible for any book over which the author has control to live again in a new and better guise. And Reb MacRath has taken this chance brilliantly. The Suiting re-emerges fire-new. 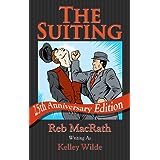 This is a constantly surprising book. At the start, in Toronto in 1981 Bouchette finds he can't deal with the loan sharks out for his blood because he hasn't got his Blake Tobey suit on: the ironic, almost tongue-in-cheek violence of this opening is a harbinger of what's to come. Shy 'seven-stone weakling' (well, not quite but not too far away) Viktor Frankl finds the suit in a left luggage locker, appropriates it for himself  it and discovers that it possesses life-changing properties. There are reminiscences of 'The Mask' starring Jim Carrey here, but the suit has a far more subtle - and terrifying - effect. Once Victor decides he will start a nearly superhuman course of body-building to grow to fit the suit and change his whole persona, he is lost. He's fine at first: he gains promotion, generates awe and fear and the admiration of women, but in the end, the suit masters him, the women drawn at first by how he looks end up laughing at him, his promotion at work ends humiliatingly. And there's a strange and disturbing undercurrent to the novel.  Montreal is portrayed as a sort of ambiguous, even threatening, fantasy compared to humdrum Toronto. But why, when Viktor goes to Montreal, do the photographs he takes seem not to be exactly what he thought he was taking but visions of the past, dating back to the 17th century? Why do we feel that there's far worse beckoning, images of death, a process lasting over centuries, involving players like Bouchette who sometimes don't seem hooked into one specific time? What terrifying fate seems to await poor Viktor now the dreadful suit has taken him over?

There's a comic-book surrealism about this novel. It's not always what it seems. It's written in a lucid prose which doesn't need to exaggerate its effects. It seems to be part of what at first looks like a recognisable genre but I feel the novel transcends it, to become a satisfying coupling of farce and horror with an overarching layer of metaphysical speculation. Ingenious, individual, sometimes very funny, sometimes really shocking, always satisfying.
Posted by Dennis Hamley at 00:30