A Foot in Both Camps by Marcus Ferrar

Seventy years have passed and still the two Word Wars have a pervasive - and dreadful - fascination for us. As a child of the Second World War it's been a constant magnet for my own writing and in four novels, many short stories and one history for young people I've tried to sort that still vivid childhood experience out for myself, both my particular consciousness between the ages of three and nine and the whole mass - or mess - of human folly, hubris, stupidity, genius, cruelty, evil, bravery, the highest and the lowest in human motive and conduct which the war as whole entailed. In my last commercially published proper novel, Divided Loyalties, I tried to examine one particular aspect, the position of a German man married to an Englishwoman living in Northamptonshire, of all places, and coping from afar with the rise of Hitler, the awful Catch 22 of being classed as an enemy alien when the war started and then the difficulty of coping with the new peace. I tried using the novelist's powers of empathy combined with research, as always, at the Imperial War Museum, to get inside the character's mind.  I don't think that, on the whole, I made too bad a fist of it.

But how I wish I could have read this book, first published by LBLA Digital and now on Kindle, before I started. 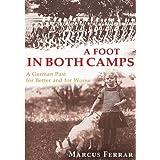 It's not often you find someone with so a deep an emotional involvement in his subject who can maintain such evenhandedness as Marcus Ferrar displays in this book. To have his background - German mother, British father - and not only be a Reuters correspondent in East Berlin at a crucial time during Communist rule but also the only accredited Western journalist permitted actually to stay in East Germany - confers a unique privilege, that of living for a while in the most sensitive place in all Europe, both East and West, and having the ability to draw conclusions and convey atmosphere which gives his testimony absolute authenticity.

The central fact of the twentieth century was the great European convulsion of 1914 to 1989, Sarajevo to the fall of the Berlin Wall.  In 1945, Germany was defeated, destroyed and dismembered. Germans had to wrestle with the full extent of their guilt - and Ferrar does not exonerate them from it. Rather, he chronicles a long and difficult expiation. The tortuous process this entailed is described with clear-eyed and empathetic understanding. The difficulties of reunification are conveyed accurately, even - despite the the author's sympathy and empathy - dispassionately. The complex range of emotions and attitudes of Germans trying to come to terms with - and surmounting - the monstrousness of their situation, is understood and presented clearly: a complex set of insights and reactions such as few have been called upon to make. The flawed conduct of the British in the second world war is not glossed over. Marcus Ferrar regards himself as British but he understands guilt when he sees it. His visit to the Frauenkirche in Dresden and his entry in the visitors' book - pretty well the only words a Briton could have written - made tears sting the backs of my eyes. A wonderful and moving book.