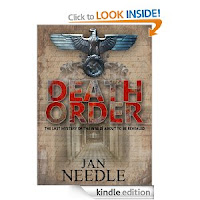 Churchill once said ‘There are a terrible lot of lies going about the world, and the worst of it is that half of them are true’.  History, as we all know, is a very unreliable narrator and the viewpoint of the story depends on who is telling it.

One of the great mysteries of the Second World War is the flight to Scotland, in 1941, of Rudolf Hess - Hitler’s deputy.  He came, apparently, to sue for peace, but was imprisoned in Britain, put on trial with the rest of the Nazi high command at Nuremburg and jailed for life as a war criminal in Spandau. Though he had never been part of the horror machine that unfolded during the later years of the war, he was never released and died, equally mysteriously, at the age of 93, in Spandau prison.

Was the man in Spandau really Rudolf Hess, or was he - as many people claimed - a man called Albert Horn? Did he commit suicide, as the Allies claimed?  Or was he killed to prevent his real identity being revealed to create a Humanitarian scandal of epic proportions.

This is more than a conspiracy theory - of which there are trillions - this is a beautifully researched, well substantiated theory.  Jan Needle has clothed it in fictional form (or should that be factional?) to create a stunning novel. It’s as pacey and compelling as a Dan Brown and much better written.  The central male character - the burnt-out MI6 operator Bill Wiley, and the spy turned academic Edward Carrington - are utterly real.  The female characters - Erica, Hannele and Jane - are intelligent, feisty and equally believable.  There’s some fantastic sex!

But the best thing is the way that this book exposes the lies that governments tell that can’t be found out until the papers are released decades after the events.  The Iraq war, with its sexed-up dossiers and phoney weapons-of-mass-destruction, was only the latest in a long line of cover-ups and propaganda coups.  The Watergate scandal that brought down Richard Nixon came out of nefarious doings in the Vietnam/Cambodian conflict.  We probably shouldn’t believe anything we’re told.  ‘History,’ as Edward remarks in the book, ‘is bunkum’.