A salt-splashed cradle by Chris Longmuir 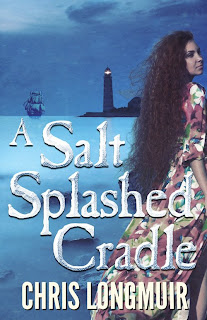 Chris Longmuir’s books so far have been mysterious, suspenseful stories concerned with some of the darker depths of human nature. So it’s surprising to learn that this one (which was apparently written before the others) is a romance. But fans won’t be disappointed. Yes, it’s a romance but the murkier motives and actions are still in evidence.

It’s set in a fishing community on ’s north-east coast in the 19th century and the author’s familiarity with the setting and her research into the customs and attitudes of the time give it genuine authenticity. She’s recreated a time and place in which men and women have their roles, their own moralities and a fierce strength born of living lives dependent on both the sea’s bounty and its cruelties. She writes of its rhythms, of how men and women alike respond to its voice and its demands, and of the hard lives they live beside it.

The characters are varied and complex, none more so than Belle, the dangerous woman at the narrative’s centre. This is no straightforward, old-style heroine. She has strengths, weaknesses, needs and a beguiling mixture of sexual magnetism and insecurity. She belongs to this community and yet is apart from it and, as the threads of the story weave around her, her stature grows and she learns, among other things, how to say no.

A Salt Splashed Cradle carries more than one love story, but there are also others from which love is missing. The writer’s control of her material is as sure here as it is in her dark modern novels and the characters are just as vivid. She takes you back to harder, less cushioned times, creates atmospheric settings and leaves you really caring about what happens to her people.
Posted by Bill Kirton at 00:30