The Salt-stained Book by Julia Jones 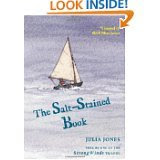 The references to Swallows and Amazons and , as well as the fact that the protagonist, Donny, is a 13 year old boy, mark this as a book for young adults but its appeal is much wider. In fact, it will delight any reader who enjoys a good story, well told, a cast of characters with humour, energy (and sometimes malice), and a central mystery that keeps you turning the pages. If, on top of that, you like sailing, this is one you mustn’t miss.

It has the feel of a Ransome adventure but goes further than that. Some of the children are troubled by very modern dilemmas which are hinted at with compassion and concern, and the adults who oversee their ‘welfare’ are conveyed with tongue-in-cheek awareness and a subtle humour. Their foster mother, for example, is the reverent Wendy whose tendency is to stand ‘beside the table being Understanding’ and her husband talks to their charges as if he were reading from a social work pamphlet. ‘Why don't you go and make some social contact with Luke and Liam?’ he says at one point. Then, later, his suggestion is ‘You could spend quality time with Luke’.

The social worker herself is even worse. She tells Donny, ‘Research confirms that your unsupported background will have left you seriously deficient in social integration skills’, and she introduces herself by ‘flashing an official identity card and a synthetic smile’ and giving her title as ‘multi-authority leader worker, S. L. A. G., School Liaison and Guidance’. (In case you didn’t know, the term ‘slag’ is a derogatory term applied – usually by men – to women.) She wears a frilly blouse, short leather skirt and pointy shoes which have ‘criss-cross thongs that went right up to her knees. After that there was so much bare leg that Donny had to look away’.

Asides such as this are carefully crafted and scattered through the narrative. The moods and changes of rivers, lakes and the sea envelop the whole adventure and even the boats used by the characters have their own identities and personalities. It’s a richly textured story with many complex depths and a highly enjoyable and thoroughly absorbing read.
Posted by Bill Kirton at 00:30