The Adventures of Margery Allingham by Julia Jones

The Adventures of Margery Allingham by Julia Jones

Reviewed by Kathleen Jones (no relation!) 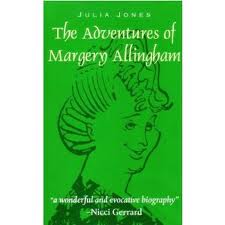 The great thing about e-books is that you can update them very easily when new information becomes available.  Julia Jones’ biography of Margery Allingham was first published in 1991 by William Heinemann and has just been republished under her own imprint ‘Golden Duck’ with new photographs and updated information.

The title is a little misleading, since Allingham’s adventures are ‘mental and moral’, and mainly on paper, channelled through her hero Albert Campion in the groundbreaking thrillers she wrote through four decades. I read her books when I was in my twenties and liked them more than Agatha Christie and Dorothy Sayers - there was always an element of humour, clowning, with an undertow of morality.  They reminded me a little of the old Mystery plays - a mix of buffoonery and serious discussion of Right and Wrong, the one highlighting the other.  Albert Campion - the mysterious, aristocratic figure at the centre of the plot, is both the buffoon and the moral compass of the novel.

I was always interested to know more about the author who wrote the novels, but somehow missed the publication of Julia’s book first time out (where was I?)  Fortunately I’ve now managed to rectify that omission.  Reading this biography of Margery Allingham has illuminated the novels for me in just the way I would have hoped.

I’d already read about Margery’s disfunctional, workaholic, journalistic family in Julia’s new book ‘Fifty Years in the Fiction Factory’, which shows Margery’s father’s heritage, writing serials for ‘penny dreadfuls’, and depicts his marriage to Margery’s mother as turbulent and unsatisfactory. Em Allingham didn’t care much for marriage or motherhood and had huge mood swings that were difficult to live with.  Margery was a precocious child who grew up nervy, and insecure, with a pronounced stammer.  She didn’t thrive on education and left school at 16 to her parents’ disappointment. Encouraged to write as a young child by her parents, there seemed no other career she would ever consider and she began to submit to periodicals, as her father had done, and wrote reviews and story-lines for a film magazine.

The plot of Margery’s first novel,  published while she was still a teenager, was ‘found’ during a seance with her family around a Weedja board.  Her subsequent plots were rather more thought-out, but she was always an instinctive writer.

If Margery was professionally precocious, she was emotionally much slower to mature.  There was a youthful ‘crush’ on a young female friend, a brief love affair with a man, before she married someone she’d known for years - the son of a woman her father had almost married in his youth - the artist Philip (Pip) Youngman Carter.  He was socially confident, handsome in a silent movie ‘spivvy’ kind of way - the kind of man depicted in cartoon casually folded against a wall, smoking a cigarette in a long holder, wearing a striped blazer and white trousers, being charming to women.  He had no regular work, but designed Margery’s book covers and gave her editorial feedback. They lived in a kind of student menage with two or three other friends, all mainly supported by Margery’s writing.

She had been brought up with a workaholic writing ethic - her father wrote thousands of words a week come hell or high water until he died, worn out by the treadmill.  Margery did the same.  She was overweight and in poor health - probably because of thyroid problems that often went untreated.  This was partly her fault - she hated consulting doctors - and partly because the doctors she did consult seem to have been less than competent.  At one point she was sectioned and given electro-convulsive therapy for depression probably caused by her thyroid condition.  As well as health issues, she was constantly pursued by the Inland Revenue and lived, until the end, haunted by the fear that she was going to be made bankrupt by their demands. Margery wrote book after book to pay the tax bills racked up by her previous publications.

Her marriage to Pip, which had begun with such cheerful, youthful optimism, soon stagnated.  Pip was extremely selfish, unwilling to have children, and a serial adulterer.  While he philandered in London, living the high life (he was in the same social circle as Prince Philip), Margery stayed in her Essex home and wrote.  When doctors found a lump in her breast, she ignored it.

After her death, Margery’s papers and those of her father, were left to her younger sister Joyce, who had lived with her during the final decade of her life, and - through Joyce - they were made available to Julia Jones.  The results are two carefully researched and beautifully written family stories - 'Fifty Years in the Fiction Factory: the Working Life of Herbert Allingham', and ‘The Adventures of Margery Allingham’.  I enjoyed them both and, as a good biography should, have been tempted to re-read the novels.
Posted by Kathleen Jones at 00:30