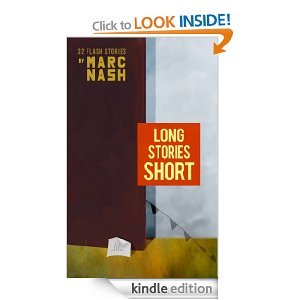 So, what did I think of Long Stories Short? Well, how long have you got because I could probably spend ages on each of the 32 flash stories that make up the collection? They’re all different, some share themes or aspects of a topic, but each one is a meticulously well-worked example of the concentrated impact this form can have when it’s manipulated by a master. And, while the stories feature specific individuals and/or isolated incidents, there’s a universality to them. They’re about birth, love, life, death and some, such as Fallen Angels, have a breadth of vision that encompasses vast movements and makes the macrocosm accessible.

But before I get too po-faced about this, let’s note that, while there’s plenty here that’s savage, black and unforgiving, there’s also plenty of humour and, most of all, there’s a delight in word-play that’s explored and sustained far more skilfully than any I can remember from other contemporary writers. Whisper it, but many of these tales recalled for me the vision as well as the sardonic humour and linguistic dexterities of Samuel Beckett. I know, I know – heresy, blasphemy. But look at Closed Book, the story of an old writer looking through the Baby Book his parents had kept of his early years, and its affinities with Krapp’s Last Tape are pretty clear.

Then turn to Crush and see how subtly but precisely the writer uses heart-related terminology to convey the impact of glimpsing his ‘bypassed Miss’, ‘a one woman love infarction’, a ‘heart stopper’. But even before she appears, the mood is set in an opening paragraph where a ‘card sharper’ is almost crushed by a toppling ‘stout-hearted oak’ which nearly induces a ‘cardiac-attack’. Throughout the tale, the word-play is delicious. It ends thus: ‘As he re-emerged back into the arteries of the city, the smell of warming cockles from a stall rendered his sclerotic muscle into a ball of wrinkles.
Heartbroken.’

One final reference to a specific tale – Cry Baby Bunting.  As with so many others, there’s a (sinister) playfulness in the title because the setting is a street party celebrating a royal wedding during which a toddler has gone missing. The wedding is intended to secure the succession to the throne but the scene of crime officers fear the abduction may be one in a succession of such incidents; two successions, then, one of which must be preserved, the other broken. And, as with the heart terminology in Crush, so here the language is manipulated deliberately to bring apparently distinct subjects into strange, uneasy relationships. ‘No cantankerous drunk,’ writes the author, ‘would abdicate cradling his bottled entitlement’ just to help a mother trying to organise a search party and, while the others were ‘drunk’, she was the one who’d lost her baby, so she was ‘the incapable one’.

Such concentrated effects are everywhere in these stories. They’re not tales you read if all you want is easy escapism. There’s an immediacy about each one. Exposition is minimal, we’re right in the action, sharing it, often getting inside not just the personality, but the psyche of the characters. Often the focus is simply ‘he’ or ‘she’ and ‘his’ or ‘her’ sensations and perceptions crowd in without preamble. The people here may mostly be troubled beings, but the natural world in which they live is also one of disharmony. The author exploits his medium with expertise but simultaneously subverts it.

So these are self-contained episodes that nonetheless carry echoes which drift through to others. They’re not just satisfying on a story-telling, narrative level but as a challenge, a mysterious sharing of something ‘normal’ and simultaneously not normal It’s our world but adapted, warped, given a slight axial shift. Indeed, a sentence from Flatpunchline (another Beckettian  monologue) could be said to describe exactly what the writer is achieving here: ‘Instinctively they felt the planet wasn’t set up right and they needed to tilt it off its everyday axis’.

If you like words, this is for you. In the end, it’s the handling of language that makes the greatest impression, not because of any slick sleight of hand but because as the words pick up each other’s resonances, they blend or slice open meanings and give a new, different depth to the subject matter. Perversely, the language calls attention to itself, the narrator is always there, handling his precious words with care, despairing at the fact that they’re being devalued. In Middle Mass he parallels the corrosive towers of scrapped computers, ipads and the like with equivalent towers of words ‘typed straight on to the face of the void’, each new clutch eliminating and compressing those which preceded it.

Indeed, after Abecedary Incendiary has chronicled the progressive extinction of various species, its ending foresees the end of culture, even civilisation: ‘Now I too have become extinct, both in body and heritage, since not one of the meagre generations which succeed me possesses any ability to read and understand these words’.

Just one more example, the brilliant Baby Steps, in which the narrator describes his emergence from the womb and the first years of his development. The story encapsulates the author’s vision and approach. He recreates the various experiences – birth, breathing, being breast-fed, learning to speak – and the reality of it is visceral. In a way, some of the words he chooses are inappropriate, but only because the reader’s own perceptions have been conditioned by habit, made comfortable. And, even as he recreates this baby’s world, language is everything. He asks ‘Is it any coincidence that as verbs, both “milk” and “cream” have the meaning to cozen or swindle?’ and when his mother baby-talks to him, it’s ‘a mummy-bird regurgitation of a bolus of phonemes, dripped directly from her tongue on to my own. Babble talk. Pidgin droppings. Non-Language’.

He quickly learn to snaps words together like lego bricks (only he puts it far more elegantly than that), and there’s a beautifully ironic postscript: ‘He went on to win every youth public speaking competition in the land and captained the Oxford University debating team to victory in the Varsity match. Whereupon he entered politics, securing a Parliamentary seat, but had to resign after a scandal in which he was caught suckling at the breast of a suburban prostitute, while dressed in a baby-grow and bonnet’.
Everything is in the mix here – beliefs, cultural systems, the despoliation of the planet – and with it all, the precariousness of language and the consequent threat to meaning itself. It’s brilliant, funny, and a collection to revisit again and again.