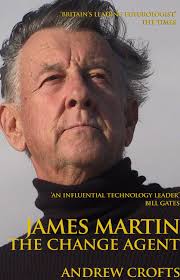 Very few people have made as much money predicting the future as James Martin.  First of all it was computers, then it was the future of the human race in the 21st century.  According to him, we are facing the biggest crisis in human history, but also our biggest opportunity.  We can turn the world into a utopia, or plunge into a terrifying ‘Dark Age’ taking the world’s fragile eco-system with us.

James Martin, who died very recently, was one of those who believed that the crises of population explosion, climate change and water shortage could be solved by technology.  But then, he was a computer buff who lived on an island in Bermuda with computer powered waterfalls, and a dazzling technology controlled house. He believed that eco-affluence was possible and that there is nothing morally wrong with it.  So long as we’re not screwing the planet to get rich, then it’s ok to have more of it than other people.  A few years ago he gave more than a hundred million pounds to fund a multi-disciplinary research institute at Oxford University into ways for the human race to survive the 21st century.

James Martin was currently predicting the ‘Singularity’ - a moment in history when computers will overtake the human mind in capability. We will be able to communicate with computers through thought alone and, as the computers will all be connected to each other in a gigantic international web, we will all be connected to each other, and the way we live our lives will be irrevocably changed.

The economic and climatic catastrophe that is looming on the horizon can be avoided by education of the masses, computer technology, clean energy, birth control and stem cell medicine.  What’s needed is education of the young in order to convince them that it’s all possible and that the future is in their hands.  Particularly women.  When you read James Martin’s work (latest The Meaning of the 21st Century), it all sounds very attractive.

He was an optimist, not a doom merchant - he held out hope.  But I was not convinced.  He may have been one of the greatest brains of the 20th century, but I think he was politically naive.  To implement his proposals there would have to be a political cataclysm so extreme it would confound history.  Human nature is conservative - we are not evolving as fast as our technologies and we are sadly lacking in that evolutionary skill ‘common sense’. Our old instincts have long since been bundled into a cupboard and the key turned in the door. The human animal is living on a fragile construction of falsehoods, and since technology has been our nemesis, I’m not sure we can be relied on to make it our salvation.

And how are we ever going to get the leaders of diverse political systems in Asia, America, Russia, Africa and Europe, to agree to put aside the politics of greed and power?  Looking back through history it seems that only a catastrophe would get them round a table to begin to talk. And once the catastrophe has happened, it might just be too late.


Andrew Crofts went out to Bermuda to stay with James Martin and interview him for this fascinating account of his life and beliefs.  It’s a very well-written book, but I would have liked a more rigorous questioning and discussion of the issues raised.