The Reawakening by Ann Evans reviewed by Karen Bush 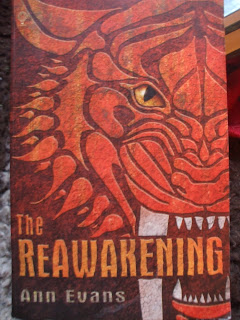 This is one of those rarities - a Family Book: something which everyone can read and will enjoy and can then compare notes on over the dinner table ... I didn't realise that it was actually the middle book of a trilogy when I first picked it up, but it's okay - it works perfectly well as a stand-alone book, although I shall now go and read the other two which come on either side of it!
It is creepy and spooky enough to satisfy without being so terrifying that it will cause sleepless nights: two children accompanying a ghost busting team which their parents are a part of, encounter a genuine spectre - that of an ancient sabre-tooth tiger which haunts the valley they are investigating. Ann Evans succeeds in the difficult task of making the unbelievable believable, setting her characters firmly in reality, never creating impossible situations and events for them to deal with, all of which which makes it easier to swallow the plot without any trouble at all.
And that's all I'm going to say as nothing is worse than spoilers!