The Reek of Red Herrings by Catriona McPherson 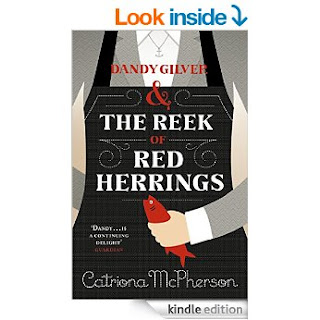 This is the first Dandy Gilver book I’ve read, although it is not the first of the series. However, it read well as a standalone crime novel, and I did not feel I’d missed anything by not reading the earlier books first.

Set in 1930s Scotland, Dandy Gilver, and her partner, described as her trusty cohort, Alec Osborne, are employed to investigate when body parts keep turning up in barrels of salted herring. They set off to infiltrate the fishing community in a stormy, dismal fishing village on what is described as the ‘wave-lashed, wind-battered Banffshire coast’ in north-east Scotland.

In order to investigate without arousing the villagers’ suspicion, they describe themselves a philologists who wish to study the fishing community’s language. Their investigations also lead them to an unusual museum of stuffed animals, run by two men who are as odd as their museum.

The book is well written and the characters and customs of the fisherfolk are authentic. The language used flows well and I particularly liked some of the descriptions – sentences such as ‘The sea roared and surged, dark green as a bottle of blood, seething and shattering endlessly against the rocks.’

The weather dominates throughout the book. It is always wild and stormy, the rain never lets up, and it culminates in a storm that tears part of the coastline down, and isolates the village.

I enjoyed reading this book, however if I had a criticism it would be the use of ‘Scotch’ to describe places and people, when it should have been Scottish, but many readers would not pick up on this. It did surprise me though, because the author was born and educated in Scotland, so I would have thought she would have known that Scotch is only used for whisky and eggs, not people or places. On the other hand this basic error could have been caused at the editing stage by a publisher’s editor. I would certainly like to think that.

I did enjoy the book, it was a good read.

The Reek of Red Herrings at Amazon.co.uk