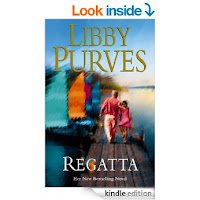 May was a merry month for new books and book reviews. I had been writing for the Bookbag site (unpaid but congenial and another way to feed one's habit) and was somewhat delighted to discover that three books I'd reviewed were all being published on the same day. They were This Is Not A Love Story by Keren David, Liberty's Fire by Lydia Syson and The Golden Age of Murder by Martin Edwards. I also reviewed A War of Flowers by Jane Thynne and The Lady from Zagreb by Philip Kerr. All admirable and enjoyable and highly recommended. If there'd been a maypole handy I'd have gone skipping round it, plaiting many-coloured ribbands. Many books good: more books better.

However, when a friend insisted that I should read Regatta by Libby Purves, my heart plummeted. I'd just completed a new sailing adventure novel and was feeling thoroughly insecure The central character is a black girl in a competitively white world -- just as in Regatta. I had wanted feedback on my story but the one thing that I definitely didn't want to hear was that it had  been “done” already – particularly by someone as good as Libby Purves. One Summer's Grace, her non-fiction account of a circumnavigation of Great Britain with her 3 and 5 year old children is a modern classic of sailing literature.

Regatta is fiction. It's set in a Suffolk coastal town named Blythney – a thinly disguised version of Aldeburgh – except that the disguise is so thin that it's less than invisible. The peculiar intensification of life and relationships that takes over the Yacht Club set during the regatta month of August is so skilfully observed that it becomes almost more real than the actual. The yummy mummies and the teen drinkers, the businessmen who have swapped their suits for baggy shorts and buffoonery, the racing hearties and the competitive picnic-makers are all there – as they appear to have been from generation unto generation. Then, into this festival of class-based bonhomie, comes a thin black child with a twisted foot and a self-defensive attitude that slips quickly to aggression. I wasn't sure I was going to be able to read it.

Anansi is the unloved child of a drug-dealing mother and an absent father. Her lameness is the result of a deliberately -inflicted injury compounded by neglect. She has been sent to Blythney by a Country Holidays Organisation in order to benefit from the fresh air and organised activity. There's an 'anyone-for-tennis' moment early on when even her relentlessly jolly hostess realises the complete impossibility of Anansi joining in. The novel constantly questions the wisdom, the efficacy – even the kindness – of such summer holiday up-rootings of inner city children while simultaneously allowing full recognition of the genuinely good heart and decency of the Blythney hostess who is struggling to help. It would have been so easy for Regatta to be angry caricature all round.

Casual unkindness provokes Anansi into announcing who she has seen doing what to whom, up against the wall in the damp Martello tower. She consciously intends it as a bomb but has not realised “how long, how slow, how messy and unsatisfying a carnage she had wrought.” Regatta is a novel for adults which is about children – rather than a book for children themselves and the adult mix of shock and comedy is finely observed as the high tide squashes everyone together on the picnic beach as they fail to escape what has been said. The emotional sympathy flows towards the adulterer's two unattractive teenage sons. One blushes dull red and turns away: the other is pale and pinched, staring into space.

No-one is without fault and for most there is a measure of redemption and relief. Choices and relationships are central – as they would be in any novel but the element that made Regatta outstanding for me – even among such an abundance of reading pleasure – was the portrayal of the river. It's a major catalyst for personality development change as young Anansi learns to sail and individual Blythney children make crucial decisions whether to treat it with respect. They've been protected by safety boats, allowed to treat it as a playground and some have come close to forgetting that it remains an alien element. Human error and the harsh environment precipitate a tense and terrifying crisis with no more props needed than some soft mud, a grounded dinghy and a few strategic planks.

Harry, the old man who has been the first to notice the potential of Anansi, views the river differently. He is knowledgeable, experienced and expert but he is also alive to its beauty and spirituality. “On a morning like this, no problem was insoluble, no grief inconsolable. His eyes misted a little: beyond this view, this dawn and this river, there hung some intangible, enormous truth and illimitable goodness.”

My eyes misted a bit at this point. I wouldn't really claim that I am reviewing Regatta. It's not a new book (though it is available on Kindle) and my copy has the melancholy rubber stamp WITHDRAWN FROM SWINDON PUBLIC LIBRARIES –  I am simply using this space to say that all the books I've read this month are good, but this, for me,  is special.

Regatta is available as a Kindle ebook
Posted by julia jones at 00:00