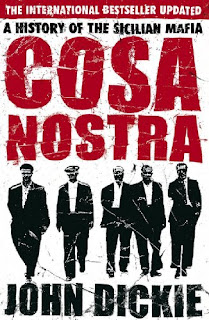 The word ‘mafia’ is known to everyone; and yet not many people have a very clear idea of what it is. Mention the mafia, and most people probably think of the American Mafia (though this is in fact an offshoot of a decidedly Sicilian tree), or a scene from The Godfather. The truth, as John Dickie shows in this excellent account, is both more interesting, and more complicated and harrowing, than fiction.

Nobody knows quite when or how the mafia came into being; even the origin of the name is now hopelessly lost and obscure. Mafiosi themselves tend to use the name ‘Cosa Nostra’ – ‘our thing’. The organisation owes much, perhaps, to Sicily’s unique history. This small island, situated in the middle of the Mediterranean, barely a stone’s throw from the Italian mainland and yet very different to the remainder of the peninsula, has been conquered by Greeks, Vandals, Byzantines, Arabs, Normans, and the French. Some of these colonial powers were more forbearing than others, but ordinary Sicilians rarely benefited from their rule. Distrust of the state, and the conviction that an honourable man sorts out his own problems and avenges insults and injuries on his own initiative, was and is widespread. Strange as it may sound, honour – albeit of the kind that few outsiders would recognise – is written into the mafia’s DNA.

The mafia seems always to have existed on two levels. On one level, it is hidden and mysterious, a sub-stratum that only its members know of or understand. Crime – fraud, drug-trafficking, money-laundering, protection rackets – is its raison d’être. On another level, however, it rises up into the mainstream and infiltrates politics, law enforcement, the judiciary, the Church. As the author says, Cosa Nostra ‘is a shadow state, a political body that sometimes opposes, sometimes subverts, and sometimes dwells within the body of the legal government.’ (Of course, and as it’s only fair to point out, there have also been politicians, policemen, judges and priests who have courageously taken a stand against the mafia, and have paid dearly for it.)

There have been many attempts to deal with the mafia, none of which have been entirely successful. Mussolini launched a war against Cosa Nostra, perhaps motivated by an incident that occurred when he visited Palermo and the mayor (a Mafioso) gestured at his bodyguards and said, ‘You are with me, you are under my protection. What do you need all these cops for?’ The implication was clear: here, the mafia were in control. The duce did not take kindly to such a statement, and under his regime the mafia seemed to be in retreat – only to advance again in the post-war era. In the 1980s, in the aftermath of the brutal Mafia Wars, a determined effort to overcome the mafia was launched by magistrates Giovanni Falcone and Paolo Borsellino, and led in time to the Maxi Trial, in which 342 mafiosi were convicted. The mafia response was swift and brutal: Falcone, Borsellino and many others were killed, which in turn led to a wave of public revulsion.

Which leads us neatly to the present situation, insofar as it can be understood. The Pax mafiosa, ironic as the name may sound, is in place, and the days of car bombs and public shootings seem to be over, at least for now. Brutality continues (‘I filled a cemetery all by myself,’ new capo Matteo Messina Denaro has reportedly claimed), but it does so in private and out of sight. The modern mafia have grasped one of the more elemental, and odd, rules of postmodern society: that which does not exist in the media can be said, in a certain sense, not to exist at all.

What of the future? This versatile organisation, deeply embedded in the structure of Sicilian society, probably isn’t going anywhere fast. It may change and adapt, but it will almost certainly continue – for the time being. ‘The mafia of Sicily pursues money and power by cultivating the art of killing people and getting away with it,’ Dickie states. That, at least – sadly – is unlikely to change any time soon.
Posted by Mari Biella at 00:30